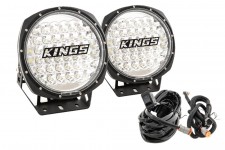 Sydney, May 23, 2018 (Newswire.com) - Driving at night time presents many different hazards, from micro-sleeps grazing wildlife, and even stationary hazards like potholes and track obstructions, these things are just a handful of the potential hazards that can be encountered whilst night driving.

As the days are getting shorter, there is no reason they need to be getting darker, this is why 4WD Supacentre have just released their brand-new Adventure Kings Domin8r 9” Round LED Driving Lights.

Being sold as a pair, the brand new kit from Adventure Kings offers a seamless way to install a set of blindingly bright LED spotlights to a vehicle.

The previous edition of Adventure Kings 9” LED spotlights offered a staggering 18,000 lumens of output, with this current release touting a massive 22,970 lumens of output with an additional 300m of usable range.

Comparing apples to apples, the Adventure Kings latest release 9” LED spotlights are one of the brightest on the market, with a total usable range of up to 863m for 1 lux of light. This impressive range is hard to beat for performance and is housed in the same rugged IP68 waterproof casing as the previous edition of Adventure Kings 9” LED spotlights.

The brand-new kit also includes an easy to install DIY wiring harness, that offers simple plug-n-play operation. Unlike many wiring harnesses on the market, the Adventure Kings plug-n-play smart harness includes clever circuitry that automatically senses whether a vehicle is negatively switched or not, allowing any H4 or HB3 light globe to be connected if a vehicle uses a different style plug, simply purchase a compatible connector to suit, and the kit will work without any tricky rewiring or modifications.

The new Adventure Kings 9” LED Driving Lights, offer a massive output drawing only 9.58A of current, making them extremely efficient, with the massive power draw giving drivers a clear vision with 6500K cool white LED Light, which has been shown to help with night vision clarity and reduce fatigue on longer trips.

The affordability of the new Adventure Kings 9” LED Driving Lights, with included plug-n-play smart harness, is extremely competitive when compared to other models on the market that do not put out as much bright white LED light but costs nearly four times the price!

The research and development that goes into the production of Adventure Kings gear, makes it some of the most affordable gear on the market, without sacrificing quality or performance.

To see the whole range of Adventure Kings LED Driving Lights, head to www.4wdsupacentre.com.au or call 1800 88 39 64

Get all your 4wd Accessories and Outdoor gear at incredibly low prices every day! Get the best 4WD Supacentre carries a range of accessories designed to make your 4WD or camping trip that much more enjoyable and keep you out on the tracks for longer.