Single Subject Amendment, a Super PAC that is registered with the Federal Election Commission, is behind this important effort. 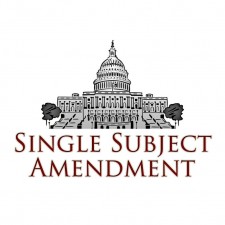 Washington, D.C., January 25, 2017 (Newswire.com) - ​​​​​In hopes of providing a simple, non-partisan solution for the way Congress conducts its business, Republican Congressman Tom Marino of Pennsylvania is spearheading an effort to add the 28th amendment to the United States Constitution by introducing H.J.Res. 25 in the 115th Congress. This amendment to the U.S. Constitution would provide that no bill introduced in Congress may become law if it pertains to more than one subject, which must be clearly expressed in the bill’s title.

“Adoption of this amendment would help President Trump in his effort to ‘Drain the Swamp’ to bring about better government for all,” said Congressman Tom Marino. “All Americans will benefit from this amendment, as will both parties in Congress.”

Adoption of this amendment would help President Trump in his effort to 'Drain the Swamp' to bring about better government for all. All Americans will benefit from this amendment as will both parties in Congress.

Although 41 state constitutions have a single subject provision prohibiting unrelated provisions (called riders) in state legislation, the U.S. Constitution has no similar provision that applies to Congress.

“Bipartisan support for a single-subject amendment to the U. S. Constitution will serve as a catalyst to unite both political parties in Congress and this amendment provides a practical solution for breaking the gridlock in Washington. This will improve the legislative process and the way Americans view Congress,” said Congressman Marino. “Adoption of this amendment will enable Congress to conduct its business in a more productive, more transparent, and less acrimonious way.”

Single Subject Amendment, a Super PAC that is registered with the Federal Election Commission, is behind this important effort.

“A single-subject amendment will constitutionally eliminate riders and reduce pork-barrel spending, logrolling and the use of earmarks,” said W. S. “Spider” Webb, Jr., CEO and Founder of Single Subject Amendment. “Too often, important ‘must-pass’ legislation is overloaded with completely unrelated provisions, that cannot pass on their own merits, to reward loyalty and usually for the benefit of a few at the unnecessary expense of the rest. The most egregious use of riders occurs when sponsors of legislation collect enough votes through riders to pass legislation, no part of which could otherwise pass Congress. This amendment will prevent public surprise and increase the institutional accountability of Congress and its members.”

For more information on Single Subject Amendment, the group’s mission and how to get involved, please visit www.SingleSubjectAmendment.com.

Single Subject Amendment is a nonprofit 527 organization and, more specifically, a Super PAC that is registered with the Federal Election Commission. Super PACs, officially known as “independent-expenditure only committees,” may not make contributions to candidate campaigns or parties, but may engage in unlimited political spending independently of the campaigns. Unlike traditional PACs, they can raise funds from individuals, corporations, unions and other groups, without any legal limit on donation size.

Our mission is to amend the U.S. Constitution to provide that Congress shall pass no bill and no bill shall become law, which embrasses more than one subject, that subject to be clearly expressed in the bill's title.