The South American country's post-war economy is blooming with investment opportunities, companies expanding to the U.S. market, and exports 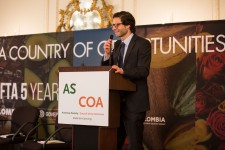 Bogota, Colombia, June 28, 2017 (Newswire.com) - After signing a peace deal last year, Colombian guerrillas finalized surrendering their weapons this week after a 52-year conflict. With peace, an array of opportunities is materializing for the South American country, which has been experiencing positive economic results for the last few years. The combination of Colombia’s bountiful natural resources, significant foreign investment, and recently established peace are quickly contributing to a new era of prosperity for the country.

Between 2000 and 2016, Colombia received USD $150.235 billion in total foreign investment. More international companies are choosing to expand their businesses in the South American country, especially since it entered a post-conflict period after last November’s peace accord. A recent study by the Colombian statistics authority found that with this peace accord, the pace of foreign investment will increase threefold in 10 years.

Investors are also seeing openings in Colombian exports. Currently, Colombia is one of the top three providers of 64 goods to the United States. Bananas, coffee, flowers, shapewear, Tahiti limes and tilapia fillets are among the categories where consumers prefer Colombian products. In coffee alone, the United States imported more than $1 billion worth last year. Colombia’s non-mining exports to the U.S. grew 12 percent in 2016 from 2012, and the number of companies exporting there rose by 13 percent to a total of 3,578 over the same period. Now with peace, almost 10 million acres of suitable land have become available for production.

Colombia’s extensive connections to the rest of the world have also been a powerful incentive for American companies looking to invest abroad. Colombia has 16 free-trade agreements in total, making it an extraordinary platform for exporting goods and services with tax incentives to more than 1.5 billion people around the world.

International tourism is also flourishing. With the peace deal, a host of new spots have become available for safely visiting like the Lost City high in the mountains of the north, the Amazon rainforest and the Serranía de la Macarena, home to dozens of species of orchids and countless more of plants, plus a rainbow-colored river. In 2016, foreign visitors reached 5 million, a 15 percent increase over the previous year.

Colombia has emerged from the peace agreement as one of great turnaround stories in history, and this bodes well for its economic future and long-term stability.

ProColombia is the Colombian government trade bureau in charge of promoting foreign investment, international tourism, exports, and the country brand. The country’s business forums are a promotional initiative created to increase awareness and knowledge about the Colombian industry and services and aims to facilitate business transactions between North America and Colombian businesses. For more information, visit www.procolombia.co.

The Most Dramatic Waterfall in Madrid is Inside a Hotel and Has No Water
Newlink Communications - Feb 26, 2020