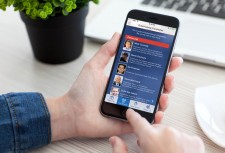 In addition to featuring candidates for the New Hampshire gubernatorial, US Senate and US Congressional races, the NH Voter Guide 2016 also profiles the Executive Council races as well as every one of our 800+ candidates vying for seats in the NH House and Senate. The NH Voter Guide 2016 mobile app is free and available now for Android and iOS mobile devices.

The app addresses a major challenge facing all NH voters—that of simply knowing basic information about those candidates who do not receive widespread media coverage.

“With today’s busy lifestyle, voters need easy access to candidate information,” stated Sharon Ponchak,  project leader for the LFDA NH Voter Guide 2016. “Our new app is an updated and improved version from 2014. Users can access information and review a candidate’s background, position on key NH issues, and more anywhere on their smartphone. Instead of having to find information about the candidates from different websites and publications, we’ve done all the work and present the information in this streamlined application.”

The 2016 app is an updated rendition from the 2014 version, which received critical acclaim and was a first-of-its-kind mobile application enabling users to learn about the candidates and where they stand on key issues.

The free app was created and launched by Citizens Count, NH’s Live Free or Die Alliance (LFDA) with the goal of making citizen engagement easier. It provides our voters with the vital information they need to cast an informed ballot. The LFDA is a strictly nonpartisan organization that takes no sides on issues, candidates, or elected officials, which means all the information included in the NH Voter Guide 2016 app is unbiased and presented without a political agenda.

The NH Voter Guide 2016 app includes features that provide citizens with the quickest, most effective way possible to:

Citizens Count, NH’s Live Free or Die Alliance is a nonpartisan nonprofit organization committed to encouraging civic engagement by providing objective information, including differing points of view on important issues facing New Hampshire citizens, as well as comprehensive information on candidates and elected officials. With a community of over 130,000, the organization takes no positions on issues, does not endorse candidates, and does not advance any political or social ideology. As New Hampshire’s “Virtual Town Hall,” the LFDA provides a forum to encourage civil dialogue and connect citizens with their elected officials. More information about the LFDA can be found at www.LFDA.org. You can also like us on Facebook by visiting www.facebook.com/LiveFreeorDieAlliance, or follow us on Twitter via @NHLFDA.

About Live Free or Die Alliance