Citizens Can Fight Alzheimer's Directly With a New Online Game 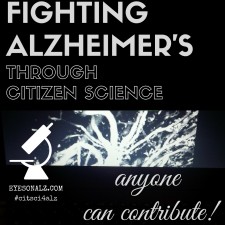 The Stall Catchers (stallcatchers.com) game, launched today, is one of the two online games being developed by HCI as part of the EyesOnALZ citizen science project. Funded by a grant from the BrightFocus Foundation, HCI has been collaborating with Cornell, Berkeley, Princeton, WiredDifferently, and SciStarter to develop a platform for crowdsourcing the Alzheimer’s research being done at Cornell University.

"Today, we have a handful of lab experts putting their eyes on the research data. If we can enlist thousands of people to do that same analysis by playing an online game, then we have created a huge force multiplier in our fight against this dreadful disease."

The Schaffer-Nishimura Laboratory (Cornell Dept. of Biomedical Engineering) has made recent breakthroughs in understanding the role of reduced brain blood flow in AD.

“Advanced optical techniques have allowed us to peer into the brain of mice affected by Alzheimer’s disease," says Prof. Chris Schaffer, the principal investigator in Schaffer-Nishimura Lab. “For the first time, we were able to identify the mechanism that is responsible for the significant blood flow reduction in Alzheimer’s, and were even able to reverse some of the cognitive symptoms typical to the disease.”

However, analysis of such data is so time-consuming, that a single research question may cost up to a year to answer in the lab. At this rate, it could take decades to arrive at functional treatment targets for Alzheimer’s. The EyesOnALZ project aims to accelerate the analysis of these data with the help of citizen science games.

“Citizen science is proving to be a powerful tool for analysis and discovery,” says EyesOnALZ principal investigator, Dr. Pietro Michelucci, “volunteers from around the world have found the first interstellar dust particles, discovered a new kind of galaxy, and are accurately diagnosing malaria 100 times faster than trained pathologists.”

“BrightFocus is proud to support such bold, innovative research,” says Stacy Pagos Haller, President and CEO of the BrightFocus Foundation. “This study is a promising way to tap the power of the crowd to accelerate research to better understand, and one day stop, Alzheimer's."

Stall Catchers will allow participants to look at movies of real blood vessels in mouse brains, and search for “stalls” – clogged capillaries where blood is no longer flowing.

Cornell University researchers believe that capillary stalls could be a key culprit in AD. By reducing such stalls in mice, the researchers were able to reverse Alzheimer’s symptoms such as memory loss and mood changes. According to Prof. Schaffer, reducing these stalls in humans could slow the progression of Alzheimer’s disease so that it no longer matter in our lifetimes.

Stall Catchers will be open to everyone:  “All you need to participate in the project is a laptop, a tablet, or a smartphone, and the desire to fight Alzheimer’s," says Dr. Michelucci. The game has already been tested by over 100 participants, including volunteers from well-known citizen science projects, such as stardust@home, Galaxy Zoo and others.

The game has also been demoed at important science and citizen science events, such USA Science and Engineering Festival, European Citizen Science Conference 2016, and smaller community events. Focused Stall Catchers sessions are in the works at retirement communities, schools, and other organizations.

According to Dr. Michelucci, the Stall Catchers game will not only be a breakthrough in how we do Alzheimer’s research, but also empower anyone to directly contribute to fighting a disease that affects them or their loved ones:

“Today, we have a handful of lab experts putting their eyes on the research data”, says EyesOnALZ Principal Investigator, Dr. Pietro Michelucci. “If we can enlist thousands of people to do that same analysis by playing an online game, then we have created a huge force multiplier in our fight against this dreadful disease.”