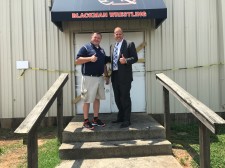 Check Into Cash Chairman and CEO Allan Jones - who has been called the biggest supporter of high school wrestling in the nation - announced that the company with 986 locations had donated $2,500 to help start the rebuilding campaign.

The wrestling building was a practice space and also housed equipment for wrestlers of all ages, including elementary students. The fire rendered the building a total loss.

Jones praised Ronnie Bray, Head Coach of the Blackman High School wrestling program, for his dedication to excellence. "We recognize that there was more than equipment in that wrestling building - there were also years of memories there that were very dear to the wrestlers and coaches," said Jones. "When we heard about the tragedy we wanted to get involved immediately so that we could help to rebuild and start making new memories."

The businessman has Murfreesboro roots. He attended Middle Tennessee State University after high school but left in 1973 at age 20 to help his father (William A. "Bill" Jones) stabilize the family's small business, the Credit Bureau of Cleveland in Tennessee. He purchased the business from his father in 1977 and developed it to become the largest credit bureau database in the state.

In the 1980s Jones purchased the Credit Bureau of Murfreesboro from the Merchants Association and automated it to become part of the biggest credit bureau database in the country.

Jones received the National Wrestling Hall of Fame's "Outstanding American" award in 2016 and has credited the sport for much of his success.

In April, the Jones Foundation auctioned off a King Ranch F-150 4X4 pickup autographed twice by President George W. Bush to benefit the Higher Calling Youth Wrestling Club of Cleveland, TN. Higher Calling is a wrestling program that gives young wrestlers of all skill levels, grades K through 8, a chance to learn the essentials of practice and competition.

In 2006, Jones started a 6-year plan to make the Cleveland High School wrestling team a state powerhouse. The goal was to rejuvenate the Kids Club, middle school, and high school programs. The plan was designed so that the 2006 sixth grade wrestlers would be state champions by the time they were high school seniors in 2013, which would be the conclusion of the 6-year plan.

The results could be seen in 2013 State Duals Finals, where Cleveland blew out 2nd place Wilson Central 78-4, setting an all-time TSSAA scoring record for the most one-sided match in Tennessee championship history. Cleveland High School won state championships in 2011, 2013, 2014, and 2015.

Prior to the implementation of the six-year plan, Bradley Central High School had served as a long-respected state powerhouse and had beaten Cleveland in competition for 19 consecutive years.

Mr. Jones noted that the Cleveland and Bradley wrestling programs are consistently ranked No. 1 and 2 in Tennessee and for the last 10 years have run roughshod over every other team - with up-and-coming Walker Valley not far behind.

Jones has donated over $500,000 to UT Wrestling Program and hosted UT scrimmage on the football field at his Creekridge estate. He has raised over $100,000 for the UTC athletics department

"Unlike football, basketball, and baseball, wrestling is an individual achievement sport. Two wrestlers take to the mat and only one walks off the victor," said Jones. "It takes determination, discipline, and character to come out ahead in wrestling. I have seen it first hand as a driving force in building character and discipline in my former classmates who are doctors, entrepreneurs, and government leaders today."

Coach Bray said the support from Check Into Cash and its founder Allan Jones was vital to the hope of rebuilding. "When Allan heard about the devastation caused by the fire, he committed to help us immediately," said Bray. "Allan has always been a great supporter of wrestling, and he has a real passion for the sport and what it does to build character in young athletes."