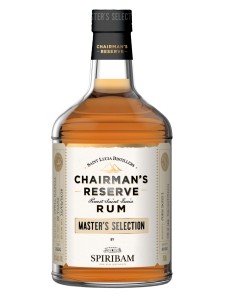 NEW YORK, December 2, 2019 (Newswire.com) - St. Lucia Distillers was formed in 1972 when the last two rum distilleries merged to preserve the rum-making heritage of the island. Laurie Barnard assumed responsibilities of St. Lucia Distillers and began installing components of his vision for St. Lucia rum, which included new fermentations, varieties of stills, and several unique barrels to blend a myriad of distillates and maturates. It wasn’t until 1999 when Laurie Barnard introduced Chairman’s Reserve Rum, that Saint Lucia finally had its ambassador to the global premium rum market and re-established Saint Lucia’s rum heritage.

On Cyber Monday, SPIRIBAM Fine Rum Specialists has launched the pre-sale of bottles harvested from one of the rare Chairman’s Reserve Master Selection barrels in the United States. From this unique barrel selected by SPIRIBAM, 168 bottles were released on SPIRIBAM's online store.

This rum was distilled from molasses on the John Dore 1 pot still in 2000 and has been tropically aged for 19 years in an ex-Bourbon cask. The proof is 53.1% and there are no additives. This extremely rare cask is one of the only ones of its kind in the world and roughly mimics the flavor profile of the original mai tai rum, Wray and Nephew 17 Yr, the holy grail of the rum world. The retail price will be $199.99, with a special offer price on Cyber Monday of $179.99 only through SPIRIBAM's online store.