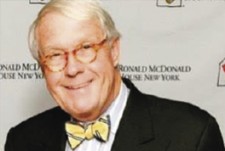 New York, New York, August 29, 2016 (Newswire.com) - Advertising legend Patricia Martin was a force to be reckoned with. Anyone in the industry will tell you that – with a smile and a nod of the head. A true industry pioneer, Ms. Martin’s life is now being commemorated through the first annual Legacy of a Lifetime Awards celebration.

The gala event is slated for Monday, September 26th, kicking off Advertising Week, at The Pierre on east 61st Street. Hundreds of advertising leaders and executives, along with District Two AAF member chapters and student chapters from colleges and universities throughout District Two are expected to be in attendance. District Two encompasses New York, New Jersey, Pennsylvania, Delaware, Maryland and Washington, DC.

During a long and illustrious career that earned her a place in the Advertising Hall of Fame – one of the first women to be inducted – Ms. Martin was immersed in many aspects of the advertising industry. One of the very first women to break into the business, she began her career as a copywriter and retired as an agency principal.

When women were first being hired as product managers, Martin was their champion and mentor. Those leadership skills took her to the top position in the American Advertising Federation (AAF) – chair of the 50,000+ member organization. Martin passed away in 2014.

District Two of the AAF, to which Martin belonged and served in various capacities for decades, is memorializing Pat Martin’s accomplishments by presenting four Legacy of a Lifetime Awards to industry notables who are currently creating their own legacies. The awards are for creativity, diversity, education and leadership. Martin was a lifetime member of The Ad Club of New York and the Advertising Women of New York.

Like Martin, those chosen to be honored with the first Legacy awards have had a tremendous impact on the growth, impact and integrity of the advertising industry. John Osborn, president and CEO of BBDO since 2004, has been chosen to receive the Pat Martin Creativity Award. Osborn is widely recognized for his ability to marshal the talents of the agency’s multi-disciplinary teams as they create compelling cross-platform communication programs. Under his direction the agency ‘s commercials are consistently among the most popular viewed during the Super Bowl.

Louis Carr, president of media sales for the BET Networks, is to be the recipient of the Pat Martin Diversity Award. One of the most influential and prominent African-Americans in media and marketing, Carr has hired more minority sales professionals than any other executive in the industry. Throughout his 15 years at BET networks, Carr has delivered over $4.5 billion targeted to African-American consumers. And the Louis Carr Internship Foundation provides motivated minority students professional experience in top companies while earning money for college.

The Pat Martin Education Award has been designated for Leslie Winthrop, co-founder of AAR Partners North America. Known as the “Madison Avenue Matchmaker,” Winthrop's firm has successfully placed over 1,500 advertisers with the most appropriate communications agency for their specific marketing needs. She has also been heavily involved in District Two AAF, chairing the National Student Advertising Competition for the past three decades.

Advertising Hall of Fame honoree and industry great David Bell has been chosen to receive the Pat Martin Leadership Award. Four years into his advertising career he was named president of Knox Reeves Advertising, and would go on to lead Bozell Worldwide as president and CEO before becoming CEO and chairman at True North Communications. He later served as president of The Interpublic Group of Companies. Bell has also held key industry leadership positions, including serving as chairman of the 4As and two-time chairman of the AAF.

Sponsors to date for the event include BBDO, The Interpublic Group of Companies, and BET.  Other supporters include Time Inc., Ogilvy & Mather, The Ad Council, The American Association of Advertising Agencies, Wired, The Advertising Club of New York and Spotify. Sponsorship opportunities and program ads are still available.

Full service marketing, advertising an public relations firm with offerings in both traditional and new media.