CarbonFree and BayoTech to Partner on Zero-Carbon Hydrogen Production 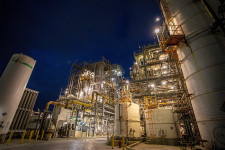 "We're thrilled to be working with BayoTech to help bring low carbon intensity hydrogen to market," said CarbonFree CEO Martin Keighley. "Our hope is that this collaboration will be part of the energy transformation we need to attack climate change."

This announcement is yet another signal that CarbonFree is readying itself to implement its technology on a grander scale and make a significant impact in the race to net zero. Two months ago the company also announced its collaboration with TETRA, a world-class player in the calcium chloride space, along with its participation in the first cohort of the exclusive Carbon to Value Initiative.

CarbonFree is a private company focused on advancing the net-zero ambitions of both CO2 emitters and consumers of carbon-negative chemicals. CarbonFree invested 15 years into research and development to prepare to bring a technology to carbon-emitting plants around the world called SkyCycleTM. This on-site solution mineralizes CO2 captured from the plant and creates products for sale or safe storage, such as calcium carbonate (PCC & limestone); sodium bicarbonate (baking soda); and Hydrochloric Acid (HCl). Learn more at carbonfree.cc or follow us on Twitter and LinkedIn.