700 tobacco users took part in the study by The Cannabis Radar; it shows promising results 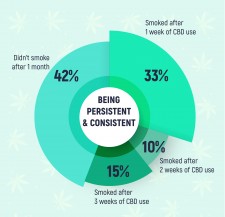 DENVER, May 21, 2020 (Newswire.com) - ​​There hasn't been much research into CBD's ability to help with tobacco addiction. A study by The Cannabis Radar takes a deeper look into the matter.

There is anecdotal evidence about the positive effects of CBD on addiction. Studies have been done but repeated trials and studies are needed to confirm and verify the results. The following study was conducted to see how CBD helps people in abstaining from smoking.

Results reviewed from this 700-person study showed that 42% of participants were able to abstain from cigarettes by using cannabidiol. It was further noticed that with short-term and long-term CBD use, the potential to stop was higher among the 25-35 age group.

Participants were asked to inhale/take CBD whenever they felt the urge to smoke. Study participants were sorted by age and divided into groups of 25 to 35, 36 to 45, and 46 to 55.

"CBD it seems is 1.2 times more effective on young adults than their older counterparts. While around 47% of the participants, aged between 25 and 35, readily abstained from smoking after using CBD for a month. Though the number declined to 35% for those around 36-45 years and rose again to 44% among those in the 46-55 years' age group," Dr. Ivan Green, Editor at TheCannabisRadar.com, said.

Below are some of the key findings of the study:

Study volunteers were recruited through an assortment of different social media groups. The criteria were that they have the motivation and desire to quit the habit.

This study was not conducted in a controlled environment. It relied on data that people who participated in the study provided. No scientist or medical practitioner participated in conducting the study.

Although a strong motivation to quit smoking is often displayed by smokers, the withdrawal symptoms usually deter them from quitting. CBD's popularity is on the rise. And, so is the realization that, besides its numerous benefits, CBD can be a viable cessation aide to cigarette smoking.

The CBD market for smokers is still in its infancy. But many smokers have turned to CBD to kick the butt and curb their nicotine cravings.

The Cannabis Radar believes this has and will increase the demand for CBD among tobacco users. Dr. Green says CBD needs further study to substantiate its positive role in smoking cessation.

About The Cannabis Radar

The Cannabis Radar is the most trusted source of the CBD news since it was created. We believe that it's our team that makes and drives us. Our editorial staff, writers, news generators have been working in this and other fields for decades now.

Are Delta-8 Carts Safe? Latest The Cannabis Radar Podcast Explains
There are a lot of CBD companies that are launching Delta-8 products, especially carts. So Ivan Green Talked about this in his latest podcast.
The Cannabis Radar - Jun 30, 2021