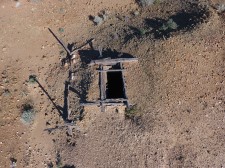 PERTH, Australia, September 26, 2019 (Newswire.com) - ​​​The historic Gold Shafts atop of the Hurleys Gold Deposit have been lying abandoned since the Second World War, with only occasional small-scale prospecting by those fascinated with the sheer dearth of hard, physical work and preservation shown by the historic Gold Rush Prospectors under the Australian Outback sun.

The prospective Hurleys Gold Shafts are today owned by Bullseye Mining Limited, a rapidly emerging stand-out gold explorer who is starting to make headlines in the West Australian gold exploration and mining sector with its impressive Greenfield gold exploration and discoveries. The Hurleys Gold Shafts are located within a 5km radius of Bullseye’s flagship North Laverton Gold Project (NLGP), which is set to come into gold production in the coming 18 months to take advantage of the soaring Aussie Dollar Gold Price and forecast shortages of Aussie Gold Metal production, as some of Australia’s more mature gold mines reach the end of their projected economic gold Reserves.

Hurleys became a significant drill target during Bullseye’s NLGP exploration drilling campaign. The Bullseye exploration team expected to encounter some remaining shallow gold mineralisation at Hurleys and wanted to test for any deeper in-situ gold mineralisation that may be present, that the earlier Prospectors were unable to access.

Following ASIC's (The Australian Securities and Investment Commission) approval of the company's notice of an EGM and AGM in April 2019, Bullseye shareholders voted strongly in favour of the current Bullseye board and management team, with shareholders casting votes to demonstrate their full support for the Company to move on from the failed hostile takeover attempt of 2018/2019. Shareholders also approved the Company's accelerated growth and development plans which include further extensive drilling at and surrounding the NLGP, in parallel to the on-site NLGP gold production plan, and, development of Bullseye’s additional Southern Cross Project.

With the green light from Bullseye shareholders, the Bullseye management team will be working to include the gold mineralisation encountered at Hurleys into the NLGP mining Reserves, extending the ‘life of mine’ (LOM) of the NLGP. Adding new ounces from Hurleys within such close proximity of the newly discovered open pits of the NLGP, at a time when the Australian Dollar gold price is adding handsome margins to the new Bullseye Project means the NLGP is becoming one of Western Australia’s newly discovered gold mining projects with considerable growth potential.

TROY Gold (Malta) Agrees 20,000 Oz Gold Deal to Be Supplied by Bullseye Mining Limited (Australia)
Malta-based company Tipbot LTD is delighted to announce the launch of its ITO, The TROY GOLD token, the world's first crypto token that can be exchanged for real-world 24 karat gold or FIAT.
TROY Gold - Jul 25, 2019