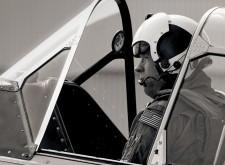 Warplanes to Siberia is a factual flight re-creation and documentary film series about the secret delivery of nearly 8,000 American-made military aircraft to the former Soviet Union via the Alaska-Siberia air route (ALSIB).  Approximately 6,000 miles (9,700 kilometers) long, the ALSIB spans three nations and runs from Great Falls, Montana up through Canada and Alaska, across the Bering Strait, into Siberia, and on to Krasnoyarsk in central Russia.  Seventy-five years later, this little-known chapter of World War II history remains a mystery to the majority of the world.

During July 2015, the BRAVO 369 flight team, along with Russian flight partner, RUSAVIA, flew and reenacted the entire ferrying flights from Great Falls Montana to Fairbanks Alaska and across Siberia in World War II-era aircraft.  The flight received a great deal of international press coverage, especially in Russia as the ALSIB program played a major role in their efforts to defeat the Nazis.

Jeff Geer, President and Chairman of the BRAVO 369 Flight Foundation said “We are very pleased with the initial meetings we’ve had with Hemlock Films. They have produced some wonderful award winning documentary films about World War II aviation history and the restoration of these historical aircraft. Hemlock brings credibility, film industry experience, and a high-degree of professionalism to our project. We look forward to working with them in the future.”

According to Geer, who is also the Executive Producer of the film, “BRAVO 369 is planning another flight in World War II-era aircraft along the entire ALSIB route in order to capture aerial footage and gather oral histories from Americans, Canadians, and Russians for the documentary film.  We want to provide viewers with a modern day account of the difficulties these pilots faced, along with the thousands of maintenance and support workers from three nations, along this remote and treacherous route across thousands of miles of wilderness.  What’s more amazing is these folks worked year round in all types of weather using whatever equipment they had – most of it archaic compared to what is available today.”

Adam White, Producer at Hemlock Films said “So much of our history is untapped and unknown to the public.  During World War II, ordinary folks were constantly doing extraordinary feats to help the cause; Warplanes to Siberia is another example of a forgotten story from that time.  We’re very excited to be a part of this project, and lend our experience to bringing that story to life.  It will be a great adventure.”

The BRAVO 369 Flight Foundation is a 501(c)(3) non-profit organization consisting of a dedicated group of business, education, and aviation professionals, committed to education and the support of science, technology, engineering, and mathematics (STEM) programs by providing educational scholarship opportunities, preserving historical aircraft, and inspiring youth worldwide to “Aim High!”  www.bravo369.org

Hemlock Films is a full-service production company specializing in Aviation Cinema. Hemlock has produced titles like The Restorers, Red Tail Reborn, and Beyond The Powder for Discovery, History Channel and PBS.  With a firm commitment to cinematic storytelling, Hemlock has won multiple national awards throughout the years including Emmy Awards and the ICAS Special Achievement Award in 2011 for Rise Above.” www.hemlockfilms.com

The BRAVO 369 Flight Foundation is a 501(c)(3) non-profit organization consisting of a dedicated group of business, education, and aviation professionals, committed to education and preservation of history and historic aircraft.