International team will fly the Alaska-Siberia air route from the United States, across Russia and Europe, paying tribute to WWII veterans. 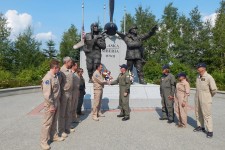 BELLINGHAM, Wash., November 13, 2018 (Newswire.com) - Citizen diplomats from both the United States and Russia are preparing an around the world “friendship flight” via the Alaska-Siberia air route (ALSIB) to honor the brave men and women of the United States, Canada, Russia and our other Allied nations as part of the 75th anniversary of the end of World War II.

According to Jeff Geer, president and chairman of the BRAVO 369 Flight Foundation, “We selected this route to draw attention to this little-known aspect of World War II history. Few people know that the United States and the former Soviet Union were once Allies. In fact, even fewer know that between 1942 and 1945 nearly 8,000 military aircraft were flown from the United States to Russia using the ALSIB air route. This program played a pivotal role in the war, yet its full and comprehensive story remains to be told.” In 2015, BRAVO 369 teamed with Russian flight partner, RUSAVIA, to fly the extremely challenging 6,000-mile air route stretching from Great Falls, Montana through western Canada to Fairbanks, Alaska and then across Siberia to Krasnoyarsk, Russia.

The ALSIB route was created under the Lend-Lease Act which was conceived by the Roosevelt Administration in 1941 just before the United States entered World War II. Under Lend-Lease, American factories, just emerging from the Great Depression, were rapidly converted to industrial powerhouses creating an "Arsenal of Democracy" in order fight the Axis powers and overtake the highly-advanced technologies of both Germany and Japan. During the “The Great Patriotic War,” as it is known in Russia, Lend-Lease and the ALSIB program was a vital link in helping them defeat the Nazis who had invaded the Soviet Union in the summer of 1941.

From June through August 2020, BRAVO 369 will undertake this historic flight, known as ALSIB 2020, beginning in Great Falls, Montana – the original staging base for ALSIB operations – travel through Canada and Alaska, and then into Russia. There they will be joined once again by their friends and former team members at RUSAVIA for the ALSIB portion of the flight. After departing Russia, the flight will continue across Europe with a final stop in the United Kingdom before crossing the Atlantic Ocean and back to North America, ending where it began in Great Falls, Montana.

Geer continued, “Even though the geopolitical landscape is much different than it was 75 years ago, citizen diplomacy and projects like this are embraced by both the people and governments of our countries. Perhaps, examples such as this can lead to improved diplomatic relations.”

On October 5, the Ambassador of the Russian Federation to the United States, Anatoly Antonov, presented a letter to Jeff Geer and the BRAVO 369 Flight Foundation, giving his personal endorsement of the historic ALSIB 2020 project. Ambassador Antonov stated, “Intent to repeat the reenactment in 2020 honoring the 75th anniversary of the victory in the Great Patriotic War and the end of WWII, while making it a round-the-world flight with a greater number of planes, deserves the highest praise and support. I am confident that your project will meet the high standards of the humanitarian mission and will show a clear example to our nations of one of the renowned chapters in our ancestors’ heroic deeds, make a great contribution to the efforts aimed to preserve Russia – U.S. common historical and cultural heritage.”

According to RUSAVIA’s general director and flight partner, Sergey Baranov, “ALSIB 2020 promises to be a landmark event as this is the last major commemoration that will be attended by our remaining veterans who served in the war. It is our chance to honor these brave men and women. ALSIB 2020 will tell their story and, as such, deserves to be supported.” He continued “It is a worthy undertaking; a noble cause that will help bring together the people of Russia and the United States by reminding us all of the shared sacrifice and cooperation in World War II.”

This challenging flight across Russia and beyond will be made using vintage World War II aircraft – the same type that were flown during the ALSIB program. According to Geer, “During the war, U.S. pilots delivered the aircraft only as far as Fairbanks, Alaska. The planes were then handed over to the Soviet pilots who flew them, year-round in all kinds of weather, across Siberia. It is as large of a logistical effort now as it was then to move aircraft and crews over long distances with difficult terrain and flying conditions. We are truly honored to re-create and document this historical event so that it can be shared and preserved for future generations.”

“The structure of world peace cannot be the work of one man, or one party, or one nation… it must be a peace which rests on the cooperative effort of the whole world.” - Franklin Delano Roosevelt

The BRAVO 369 Flight Foundation is a 501(c)(3) non-profit organization consisting of a dedicated group of business, education, and aviation professionals, committed to education and the support of science, technology, engineering, and mathematics (STEM) programs by providing scholarship opportunities, preserving historical aircraft, and inspiring youth worldwide to “Aim High!” www.bravo369.org

Russian Aviation Company, Ltd. (RUSAVIA) is the supplier of aviation parts, instruments, and equipment for Russian-built aircraft worldwide. In addition to its commitment to history and the preservation of historical aircraft, RUSAVIA is dedicated to the development of small aviation, strengthening the friendship between Russia and the United States, honoring veterans, and the education of the younger generations. http://en.rusavia.com

The BRAVO 369 Flight Foundation is a 501(c)(3) non-profit organization consisting of a dedicated group of business, education, and aviation professionals, committed to education and preservation of history and historic aircraft.