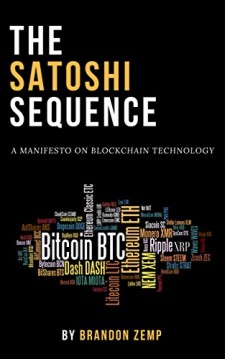 LAS VEGAS, November 24, 2017 (Newswire.com) - Brandon Zemp launches a book that will enlighten us all on the new currency that could change the world. It is easy to read and gives all of us that are in the dark information on blockchain, cryptocurrency and bitcoin.

Brandon Zemp's easy to read “Satoshi Sequence” educates us on the possibilities of blockchain.

When the virtual currency bitcoin was released, in January 2009, it appeared to be an interesting way for people to trade among themselves in a secure, low-cost, and private fashion. The bitcoin network, designed by an unknown programmer with the handle “Satoshi ­Nakamoto,” used a decentralized peer-to-peer system to verify transactions, which meant that people could exchange goods and services electronically, and anonymously, without having to rely on third parties like banks. Its medium of exchange, the bitcoin, was an invented currency that people could earn — or, in bitcoin’s jargon, “mine” — by lending their computers’ resources to service the needs of the bitcoin network. Once in existence, bitcoins could also be bought and sold for dollars or other currencies on online exchanges. The network seemed like a potentially useful supplement to existing monetary systems: it let people avoid the fees banks charge and take part in noncash transactions anonymously while still guaranteeing that transactions would be secure.

Yet over the past year and a half, bitcoin has become, for some, much more. Instead of a supplement to the dollar economy, it’s been trumpeted as a competitor, and promoters have conjured visions of markets where bitcoins are a dominant medium of exchange. The hyperbole is out of proportion to the more mundane reality. Tens of thousands of bitcoins are traded each day (some for goods and services, others in exchange for other currencies), and several hundred businesses, mostly in the digital world, now take bitcoins as payment. That’s good for a new monetary system, but it’s not disruptive growth. Still, the excitement is perhaps predictable.

Bitcoin is not going to make government-backed currencies obsolete. But while the system’s virtues, such as anonymity and the lack of bank fees, may not matter much to most consumers, one can envision it being useful in a variety of niche markets.

Central bank representatives have stated that the adoption of cryptocurrencies such as bitcoin poses a significant challenge to central banks’ ability to influence the price of credit for the whole economy. They have also stated that as trade using cryptocurrencies becomes more popular, there is bound to be a loss of consumer confidence in fiat currencies. Gareth Murphy, a senior central banking officer has stated that “widespread use [of cryptocurrency] would also make it more difficult for statistical agencies to gather data on economic activity, which are used by governments to steer the economy.” He cautioned that virtual currencies pose a new challenge to central banks’ control over the important functions of monetary and exchange rate policy.

Brandon Zemp’s new book, “The Satoshi Sequence” will be released on Black Friday! The book will answer the questions everyone is asking:

•What is bitcoin?
•How do I invest in cryptocurrency?
•How will blockchain shape the world?

“The Satoshi Sequence” goes far beyond your average book. It really is a book that will be bought by the masses — blockchain and bitcoin investments for Dummies.

This manifesto will not only enlighten you on Blockchain technology and the exciting opportunities in Cryptocurrency, but will explain the exponential shift that's taking place right now. A revolution is brewing and you have a chance to play a part in it, but you have to take your first step onto the path less taken.

The Satoshi Sequence will...

•Teach you how to invest, mine, and utilize cryptocurrency
•Unveil the history behind this revolution
•Give foresight into the future of Blockchain
•Elaborate on the ideology of this new technology
•Provide you the tools necessary to capitalize on this opportunity