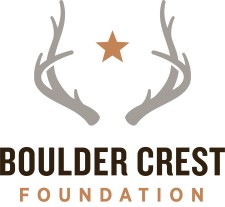 BLUEMONT, Va., May 27, 2020 (Newswire.com) - ​​Boulder Crest Retreat officially changed its name to Boulder Crest Foundation to better reflect its broad mission as a veteran-led nonprofit organization that uses the proven science of Posttraumatic Growth (PTG) to heal, train, and advocate for combat veterans, first responders, and their families, who have experienced trauma.

From the organization’s beginnings as a retreat center for combat veterans and their families, it has expanded its mission to include scaling PTG-based programs with partners across the country, first responder care, and advocacy and policy work to help drive more accessible, effective solutions across the nation’s mental health system.

“These branding changes reflect the success and massive growth in our mission, and our commitment to doing everything we can to ensure that combat veterans, first responders, and their families can live great lives in the aftermath of trauma,” said Ken Falke, chairman and founder of Boulder Crest Foundation. Falke continued, “We have come a long way since 2011, and that has been made possible by the generosity and vision of our leadership, donors, and the hard work of our team. We are incredibly optimistic about what the future holds and the continued growth of our capacity to transform lives.”

The name change is official immediately. The updated website is available at http://bouldercrest.org.

Boulder Crest Retreat Foundation incorporated in the Commonwealth of Virginia in 2011. After two years of fundraising, construction, and partnership development, the Foundation opened its Virginia facility on September 6, 2013, as the nation’s first privately funded wellness center dedicated exclusively to combat veterans and their families. The center initially served as a place for severely wounded warriors and their families to enjoy respite outside of Bethesda Naval Hospital and Walter Reed Army Medical Center.

In May 2014, after six months of hosting partner programs focused on the “invisible” wounds of war, Boulder Crest launched their own program, Warrior PATHH, the first program ever designed to cultivate and facilitate Posttraumatic Growth, ensuring that combat veterans could transform struggle into strength.

In January 2016, the Marcus Foundation (Georgia) provided funding to Boulder Crest to develop a comprehensive Warrior PATHH curriculum, designed to facilitate scaling the groundbreaking program, and evaluate its efficacy. The results demonstrated that Warrior PATHH delivered results that are three to five times better than traditional mental health approaches. Based on indisputable results, the A. James and Alice B. Clark Foundation provided a $10 million gift to Boulder Crest in 2017 to purchase and open a second facility just south of Tucson, Arizona – Boulder Crest Arizona.

Following the successful expansion of our programs and operations in Arizona, the Marcus Foundation and The Harry and Jeanette Weinberg Foundation (Maryland) funded the establishment of the Boulder Crest Institute in September 2018. The Institute’s mission is to develop, deliver, study, and scale Posttraumatic Growth-based solutions to times of struggle, including anxiety, depression, PTSD, and suicidality.

The Institute leads Boulder Crest’s effort to train selected partners to deliver Warrior PATHH across the country, and today the program is being delivered in Virginia, Arizona, Florida (with GratitudeAmerica), Georgia (with Camp Southern Ground), and shortly in Maine (Travis Mills Foundation) and South Carolina (Big Red Barn Retreat). By October 2021, Warrior PATHH will be delivered at ten locations across the country.

With this swift growth, mission expansion, and overall progress, Boulder Crest has reflected on the organization’s position and purpose. In so doing, the Board of Directors determined that the word “Retreat” is no longer a sufficient descriptor of the scope of our national efforts. The word ‘Retreat’ is officially removed from the legal name, known now as Boulder Crest Foundation.

Although the name changes to reflect the sophistication of Boulder Crest’s PATHH programming, our Family Rest and Reconnection (R&R), program remains available at the Arizona and Virginia centers.

Boulder Crest Foundation is a veteran-led organization that uses the proven science of Posttraumatic Growth to heal, train, and advocate for combat veterans, first responders, and their families, who have experienced trauma. Boulder Crest develops, delivers, and is scaling transformative programs to ensure these remarkable men and women transform struggle into strength and lifelong growth, so they can live the great lives they deserve. More broadly, Boulder Crest is working to drive change across the mental health system, in pursuit of a system that is accessible, effective, and healthy. For more information about Boulder Crest Foundation please visit http://bouldercrest.org.

A privately funded retreat for military and veteran combat stress recovery founded on the science of posttraumatic growth..