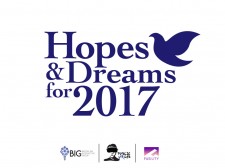 One goal of the Public VR Lab and this project is to reduce the barriers to entry and show that virtual reality content creation can be easily created and shared on the web using WebVR and the programming language A-Frame, an open source tool created by Mozilla.

Kathy Bisbee, co-founder of the Public VR Lab, said that the accessibility to mass media, and gaining access to equipment and training are issues that traditional community media and VR share. “The Hopes & Dreams project and WebVR help lower the barriers to entry in the virtual reality (VR) and augmented reality (AR) space, bringing new creators and storytellers into our community media centers to use our 360 cameras, and take classes in mixed reality content creation,” said Bisbee.

“VR/AR is still in its nascent stages, but it’s growing fast. Many creators and storytellers don’t have the technical tools or the new skills required for this new industry,” she said, citing the need for public accessibility to be part of the VR conversation.

Nir Darom, BIG's lead creative designer shared how the storytelling works in VR: "In the Hopes and Dreams project, we wanted to let viewers feel as though they were right there, inside the circle of residents of Brookline sharing their hopes and dreams. Once you're inside the circle, whoever you visually 'click on' begins talking. This immediacy is what makes VR such a great documentary tool.”

When Fasility’s co-founders heard about the Public VR Lab’s mission, they knew WebVR and A-Frame would be a natural fit. “WebVR has the power to transform human storytelling,” said Kathy Trogolo, Fasility’s CEO. “Creators and storytellers are sharing something precious. Thanks to VR, their words and emotions are almost as impactful as they would be in person; plus, the interactive experience allows the viewer to pause and reflect on the content more deeply. The Public VR Lab and the Hopes & Dreams project is a perfect match with our mission to empower authors to create 3D immersive and interactive webspaces.”

5. Works on the smartphone you already have in your hand
4. Anyone can be an author — no expensive software or hardware needed
3. Incorporates browser’s built-in accessibility features
2. Works across mobile, desktop, and VR equipment like HTC Vive and Oculus Rift
1. No app store!

To view the Hopes and Dreams Virtual Reality project, visit the site below: http://brooklineinteractive.org/had

The Public VR Lab was founded in May 2016 to facilitate dialogue and innovative projects around immersive technologies in the public interest; to support the creation community content, provide education, digital inclusion and public access to VR/AR/360 tools, coding, filming, and headsets, and to serve as an incubator for collaborative and hyperlocal XR experiences. It is a collaborative project co-founded by Kathy Bisbee, Brookline Interactive Group (BIG), and Al Williams, Northampton Community Television (NCTV).

Fasility is a WebVR consultancy focused on education and user empowerment. Fasility helps their clients create web-based VR experiences that are easy to navigate, impactful, and play back on desktop, cardboard, and high-end VR devices. Established in 2016, Fasility prioritizes design, human factors, and interoperability to reach broad and inclusive audiences. Through studio projects and customized training, Fasility is bringing the power of VR to everyday content creators.