BillionToOne and Eluthia have announced today the launch of the first and only non-invasive prenatal test, allowing to screen for the autosomal-recessive conditions cystic fibrosis, spinal muscular atrophy (SMA), sickle cell disease and other hemoglobinopathies. The UNITY™ screen will be made available through Eluthia in Germany, Austria, Switzerland, and the Netherlands, as of now. 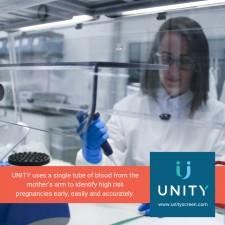 MENLO PARK, Calif., October 31, 2019 (Newswire.com) - BillionToOne and Eluthia have announced today the launch of the first and only non-invasive prenatal test, allowing to screen for the autosomal-recessive conditions cystic fibrosis, spinal muscular atrophy (SMA), sickle cell disease and other hemoglobinopathies. The UNITY™ screen will be made available through Eluthia in Germany, Austria, Switzerland, and the Netherlands, as of now.

The UNITY™ test is the first non-invasive prenatal screening test, that allows screening for single-gene mutations from the fetal DNA gathered from maternal blood. This outstanding diagnostic improvement is facilitated through the proprietary Quantitative Counting Template Method, developed by BillionToOne, which eliminates the amplification bias that previously prevented accurate quantification and counting of the DNA molecules of interests in maternal blood.

The UNITY™ test consists of two steps; both performed from the same blood sample: In the first step, the carrier status of the mother is ascertained. Only if the mother is a carrier of one of the screened mutations, it will be tested if the fetus is homozygous for the pathogenic variant.

The UNITY™ test quality parameters are excellent: Detection rate ranges for the carrier status ranges between 90% and >99%, meeting and surpassing the gold-standard for carrier screening for each of these disorders. The follow-up NIPT screening step, a unique component of UNITY™ that interrogates fetal status, demonstrated 100% accuracy in clinical trials, including a study that was done in collaboration with Baylor College of Medicine and was funded by National Institute of Health in the US.

“We are delighted to launch UNITY™ test in Central Europe, to make this important tool available outside the US for the first time,” states Oguzhan Atay, BillionToOnes’ founder, and CEO. “With Eluthia’s genetic testing and regulatory experience and their extensive physician network in Central Europe, we are confident that the UNITY test will dramatically improve the standard of prenatal care in Europe.”

“We are honored to partner with BillionToOne to offer their paradigm-changing UNITY test in Europe,” says Ramón Enríquez Schaefer, Eluthia’s CEO. “The possibility to prenatally screen for these medically highly relevant diseases for the first time will have a huge impact not only allowing pregnant women to make informed decisions on the course of their pregnancy but in particular, it will allow the efficient implementation of new therapy options.”

​BillionToOne, headquartered in Menlo Park, California, is a precision diagnostics company with a mission to make molecular diagnostics more accurate, efficient, and accessible for all. The company’s patent-pending QCT molecular counter platform is the only technology platform that can accurately count DNA molecules to the single-count level. BillionToOne’​s first product, UNITY, is the first and only noninvasive prenatal screening that tests fetal cell-free DNA for cystic fibrosis (CF) and spinal muscular atrophy (SMA) through a single sample of the mother’s blood. BillionToOne was co-founded by Oguzhan Atay, Ph.D., and David Tsao, Ph.D. For more information, visit www.billiontoone.com or www.unityscreen.com.

Eluthia is a start-up laboratory based in Heidelberg, Germany, co-founded by Ramón Enríquez Schaefer, Ph.D. and Tarrin Khairi-Taraki. Eluthia’s mission is to improve the diagnostic standard of care by providing innovative genetic diagnostic tests that offer a true benefit for the patients at an affordable price. Eluthia is known for its proprietary ProviaTest®, which screens for sex chromosome aneuploidies (Turner-, Klinefelter-, Jacobs- and Triple-X-Syndrome) and for thirty microdeletions, including the 22q11.2 microdeletion (DiGeorge syndrome) in newborns. Eluthia also offers the PreviaTest, a non-invasive prenatal screening test for the trisomies 21, 18 and 13 and over 90 microdeletions. For more information, visit www.eluthia.com. 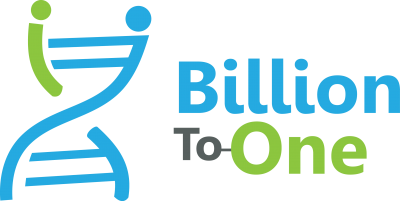 BillionToOne's Senior Vice President of Sales and Commercial Operations Named One of the Top 25 Women Leaders in Biotechnology of 2021
Billiontoone, Inc - Oct 20, 2021