The tour company offers tours of Central Park and other areas of NYC, to accommodate travelers short on time. 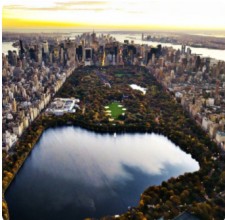 NEW YORK, May 1, 2018 (Newswire.com) - Central Park isn't just one of the most popular tourist attractions in New York City, it's the most popular park in the nation, recording 42 million visitors in 2016.

The challenge for visitors, especially tourists who have a limited amount of time in New York, is seeing so much without rushing through and missing anything. Fortunately, Central Park Bike Rental has a solution.

A guided Central Park bike rental tour is perfect for adults and families who want to see it all in just two hours while learning about the park from a local.

Blair Nicole, PR Director for Central Park Bike Rental, says that "A guided Central Park bike rental tour is perfect for adults and families who want to see it all in just two hours while learning about the park from a local. Or, people who want to have full control can rent their own bikes. We provide top-of-the-line bikes, and there's everything from kid's bikes to tandem bikes here."

Central Park is really a town in and of itself, and one can spend an entire day exploring architecture, trails and other attractions. But, visitors short on time, can still get a taste of the park by booking a two hour bike tour.

For instance, the Central Park Zoo is a five-acre gem that not only houses130 species, but also offers classes and exhibitions. History buffs can ride uptown on the east side of the park to 106th Street to visit Fort Clinton, the place where the British first built a fortification in 1776, following their invasion of Manhattan.

Central park isn’t the only tour, however. Tourists with a little more time in the city can take a customized tour of different areas in NYC or even combine a bike tour with a Liberty Cruise tour, which gives spectacular views of New York Harbor.

Here are a few of the different neighborhoods visitors can expect to discover with a Central Park Bike Rental tour.

Another option for visitors who have seen Marcus Samuelsson on one of his many television appearances on Top Chef Masters or The Food Network, among others is the New York at Night Bike Tour. Visitors will get to see well-known landmarks like Times Square, Rockefeller Center, St. Patrick’s Cathedral and more under the stars and bright shining lights.

“New York at night is so different, “ said Blair Nicole,  “You might notice things you wouldn’t in the day.”

Bike Rental Central Park has a fleet of over 500 bikes, and offers an all inclusive rental package that provides a map, helmet, chain lock and even a basket at no extra charge. The bikes are available in any size and style, including mountain tandem bikes.