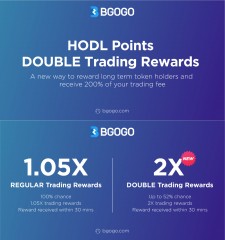 NEW YORK, November 14, 2018 (Newswire.com) - Bgogo aims to bring the most promising projects and innovative features, being the cryptocurrency exchange of the community, by the community, for the community.

As the Bgogo Exchange grows past its initial stages, it aims to continue to provide fresh and innovative features to its community.

The Bgogo platform has gained immense popularity through the use of Trading Rewards. This reward mechanism offers 105 percent trading fee rebates 100 percent of the time, setting itself apart from other exchanges. Bgogo’s Trading Rewards have become an attractive alternative to reward users for contributing to the platform’s ecosystem.

The current mechanism has become increasingly competitive due to its popularity, demanding Bgogo to continue to provide innovative features for its eager users. As a response, Bgogo has decided to offer new iterations of its origin trading reward model to providing users with more options.

The Advantages of Trading Rewards

As Bgogo’s key strategy, trading rewards have proved its advantages. Trading Rewards provides value to the exchange and users by rewarding users in the platform native token for trading. This creates a symbiotic relationship between traders and the exchange, with the platform token in the middle.

Trading Rewards have given users the power to trade essentially for free, rather than trading fees that are as high as one percent in some exchanges. The platform’s popularity and growth in user activity have resulted in intense competition, especially among experienced bot traders, for the daily Trading Rewards available.

Increased demand is great news for Bgogo, but it has now left retail investors craving more options. Bgogo answers by further evolving and innovating for the sole purpose of benefiting retail investors.

A Taste of DOUBLE Fun

BGG HODL Points is a score based on weighted BGG holdings that appreciate one percent each day to emphasize the value of the BGG holding period. The longer the user holds BGG, the higher their BGG HODL Points. Bgogo developed this scoring system in order to reward long-term value-investing BGG holders with a similar investing philosophy as Bgogo.

Users who feel lucky can adjust their trading fee to up to five percent, increasing their DOUBLE Trading Rewards. The odds of receiving DOUBLE rewards varies: 45 percent, 50.5 percent and 52 percent, respective to the user’s BGG HODL Points level.

“A risk-averse user that makes a 10 ETH transaction can receive up to 0.02 ETH in BGG. A user that is feeling lucky makes a trade of 10 ETH can receive up to 1 ETH of their trading fee back as a reward in BGG. The possibilities are endless,” said Bgogo CEO Max Wang.

Bgogo understands the value of giving more options and value to loyal retail investors. This begs the question of how can loyal users earn more while having fun. A user can choose to play it safe or take a chance on winning big. Bgogo will appeal to both groups of users with this option.

This next milestone for Bgogo will pave a new path in the industry and be the standard for community-based exchanges. Bgogo promises to continue to evolve and innovate beyond the industry norms and work for the benefit of the community.