Betway Reveals the Biggest and Most Successful Casino Acts That Las Vegas Has Ever Witnessed, Including Elvis, Celine Dion & David Copperfield 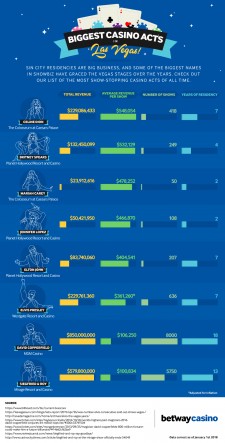 London, United Kingdom, January 18, 2018 (Newswire.com) - Las Vegas is known as the entertainment capital of the world, attracting over 40 million tourists and revellers each year. Concert residencies have been a staple in Las Vegas since the days of Liberace and Frank Sinatra, while many other iconic performance artists have gone on to try their hands at residencies in the biggest Vegas casinos, often resulting in astonishing success.

Betway, a leading provider of first-class entertainment across sports betting, casino, bingo and poker has created a showstopping infographic revealing the top eight most successful casino acts in Las Vegas. This features legendary musicians such as Elvis and Elton John, alongside magicians David Copperfield and Siegfried and Roy, with some staggering statistics to match.

Here are some of the jaw-dropping findings:

With Lady Gaga soon to join the ranks of Elvis and Britney Spears, in a $75 million deal, it’s clear that the stages of Vegas’ casinos have lost none of their allure for the stars. Entertainment in the gambling capital of the States is entering a new era and reaching younger audiences than ever before. With a reputed $1 million per show, it won’t be long before Lady Gaga hits the heights of the all-time top Vegas earners featured in Betway’s infographic.

These Are the Best and Worst Airports to Get Delayed at This Holiday Season
BlueGlass - Oct 23, 2018

From Airbnb to Sony, Auto Trader Imagines What Electric Cars of the Future Might Look Like
BlueGlass - Sep 17, 2018
How Thomas Cook Achieved a Fivefold Increase in Traffic by Implementing BRIDGE Store Locators
Following the deployment of BRIDGE in December 2016, the group saw a huge increase in traffic on its Jet Tours and Thomas Cook store locators in just three months
BlueGlass - Apr 10, 2018
Newswire