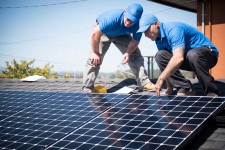 “Our solar panels by SunPower use Maxeon® solar cell technology to make more solar energy from every drop of sunshine. In fact, they’ve been proven to produce 70% more energy over 25 years than other panels on the market,” said Jeff Parr, Owner of Solar Technologies. “Our panels are fundamentally better because they’re crafted with solid copper foundations, which add massive strength to the system, and help it generate more solar energy.”

All solar panels are not equal. Compared to a conventional panel, Maxeon solar cells are fundamentally better because they’re designed with ultra pure silicon, which delivers optimal power conversion and captures more of the sun’s energy.

“Our panels hold the world record for highest efficiency silicon solar panel at 24.2%, delivering 44% more power per square foot of solar panel. This means they produce more solar energy, which directly equates to greater solar savings(*),” said Mr. Parr. “Not only do our solar panels produce more solar energy, but when compared with 15 other top solar manufacturers, our warranty guarantees the most power. On average, our systems have been proven to have a useful life of more than 40 years.(*)”

Solar Technologies is a SunPower Master Dealer, and one of the Bay Area’s leading providers of state-of-the-art solar power systems. Since 1998, they’ve installed over 75,000 solar panels for residential, commercial, and industrial clients, helping them save thousands annually on electric bills. To maximize the amount of energy you receive from every drop of sunshine, it’s imperative to pick a solar company that has the best panel technology available.

“To get the most out of your solar investment, it’s key to generate as much solar energy as possible,” said Parr. “Some of the variables include how much sun your roof receives on a daily basis. While this changes seasonally, you’ll want to install solar panel technology that works harder by maximizing the solar energy your panels receive throughout the day,”

To find out how you can save with solar, visit one of California’s leading solar companies at http://solartechnologies.com and start on your path to energy independence.

Founded in 1998, Solar Technologies has installed more than 75,000 solar panels and helped thousands of Bay Area home and business owners save with solar. Solar Technologies is proud to have been handpicked by SunPower to represent them directly as their Bay Area Master Dealer, the highest ranking of any SunPower dealer. This designation can only be earned through experience, quality, depth of resources, and customer satisfaction scores. People interested in solar are encouraged to stop by either the company’s Santa Cruz or San Ramon stores, or visit them online at http://solartechnologies.com to see how much they can save with solar.

Waiting to Go Solar Will Cost You
WIND ON WATER COMMUNICATIONS - Sep 29, 2017
Newswire