12th Annual Event Not a Stranger to Record Setting 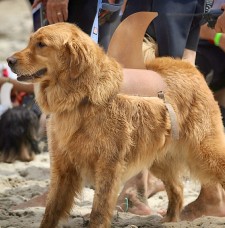 A large crowd of fur fans (approximately 3000) cheered on the surFURs from the sand and the Imperial Beach Pier.  The canine competitors, who were judged by professional surf judges, participated in heats based on their weight, with small, medium, large, extra-large, “shredder” categories as well as tandem divisions of dog/dog and dog/human.  The dog-dog tandem heats included one team that had four Nova Scotia Duck Tolling Retriever dogs on a board all dressed in patriotic themed surf-wear.

Dubbed, BARKNADO, in honor of Sharkweek, a world record was attempted for most dogs wearing shark fins on the beach.  The attempt was for fifty dogs and the final results were sixty-one “landsharks”.  Although a record was set, it is still unofficial pending Guinness World Record approval.  Record setting is nothing new to this competition, as in 2012, a world record was set with most dogs on a board (12).

The winners of the 2017 Imperial Beach Surf Dog Competition are:

The Imperial Beach Surf Dog Event is part of the Surf Dog Events Series, which culminates with the Surf City Surf Dog® event in Huntington Beach on September 23. For more information, please visit surfdogevents.com and like us on Instagram/SurfDogEvents and Facebook.com/SurfDogEvents 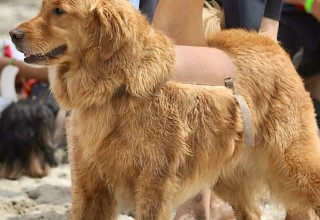 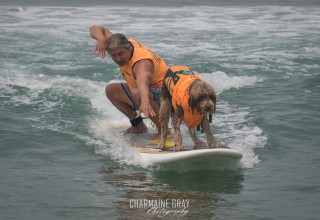 About Book That Event, LLC

Book that Event, LLC is a full-service event management/marketing and logisitics company.