The Constitutional Court of Slovenia Makes a Long-Awaited Decision 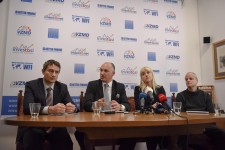 Review of the Banking Regulations was triggered on December 4, 2013 when Expert Council Member of the PanSlovenian Investors' and Shareholders' Association (VZMD), Mr. Tadej Kotnik, filed a petition (Kotnik e.a.) for constitutional review with the Constitutional Court on behalf of 158 people who were expropriated as part of the Slovenian bank bail-in.  The petition was written with the assistance of attorney Mr. Miha Kunič and the support of VZMD.

The PanSlovenian Investors’ & Shareholders’ Association (VZMD) www.vzmd.si, was founded to protect the rights of minority shareholders and retail investors and is led by its President, Mr. Kristjan Verbič (Verbic@vzmd.si).  Mr.Verbič is on the The European Federation of Investors and Financial Services Users (Better Finance), www.betterfinance.eu, a member of the Corporate Finance Standing Committee of the European Securities and Markets Authority (ESMA) and a member of World Federation of Investors (WFI).

Investors Wiped-Out as Part of the Slovenian Bank Bail-in Are Supported by a Favorable Ruling From the European Court of Justice
PanSlovenian Investors' & Shareholders' Association (VZMD) - Jul 21, 2016