Brilliantly satirizing the Trump Administration, this irreverent board game has drawn rave reviews

LOS ANGELES, October 26, 2017 (Newswire.com) - Balding Eagle Games, the producer of the popular "The Trump Border Wall Game," has announced the release of the controversial, yet highly-sought-after offering themed after the ultimate endgame of America’s 45th president.

Featuring hostile takeovers, ownership of the coveted Wall, and yes — full border security, the Trump Border Wall Game is making a hilarious splash in the world of board games. Allowing two to six players, Trump Monopoly even grants the ability to revoke real estate without consent, as it closely mimics true events that are stranger than fiction.

The game is Balding Eagle Games’ latest release. Formed a few years ago in Los Angeles, California, the company prides itself on local design and manufacturing, ensuring that they do their part to Make America Great Again.

Border Wall game is available in extremely limited quantities at a price of $30.00. The game has been so controversial that Balding Eagle Games has had to discontinue its production, so consumers are urged to reserve the board game as quickly as possible.

Those interested in purchasing the limited edition board game are advised to visit Balding Eagle Games’ online store. Once there, consumers are also able to buy other Trump-themed board games, whose success has put Balding Eagle Games on the map for biting satirical takes on the current political landscape. In future months, the game maker has plans to publish printable cards that can be used in-game that are based on news events revolving around President Trump. (see sample attachments)

For more product information, or to make a press inquiry, please contact Balding Eagle Games via their online contact page. 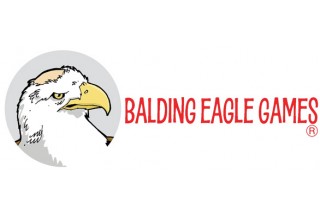 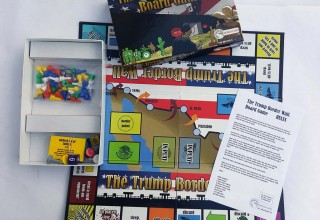 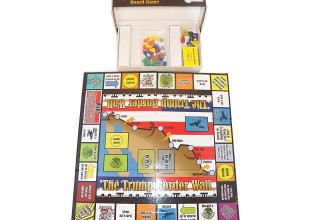