Attorney Randall R. Saxton Was Honored With the Pro Bono Award at a Ceremony in May 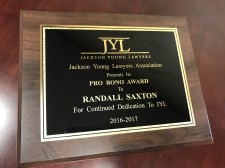 Madison, MS, June 21, 2017 (Newswire.com) - Madison attorney Randall R. Saxton of Saxton Law, PLLC and the Mississippi Emergency Management Agency received the Pro Bono Award for his commitment to pro bono mediations in municipal court as well as through leadership with community organizations. Over the past year, he has handled a number of time-intensive pro bono mediations and served as the Chair of the Jackson Young Lawyers Mediation Committee.

The award was presented by the Jackson Young Lawyers Association at its and the Capital Area Bar Association's Evening Honoring the Judiciary on May 18 at the Jackson Country Club in Jackson. Held each year, the dinner pays tribute to the critical role of this co-equal branch of government in ensuring and preserving the rule of law established under our Federal and State constitutions and also featured remarks by The Honorable Carl E. Stewart, Chief Judge of the United States Court of Appeals for the Fifth Circuit and Mississippi Supreme Court Chief Justice William L. Waller, Jr.

Mr. Saxton founded Saxton Law, PLLC in 2013 and focuses his practice on bankruptcy, IRS tax installment agreements, business formation, and estate planning, including wills. He also serves as the attorney for the Mississippi Emergency Management Agency, on the Board of Directors of the Madison Chamber of Commerce, and as JAG officer for the Mississippi State Guard. He is the Chairman of the Jackson Young Lawyers Association’s standing committee for mediation and is a member of the American Bar Association Young Lawyers Division Committee on Bankruptcy. Saxton was selected by the Mississippi Business Journal as one of the state's Top 50 Business Leaders Under 40 and has been named by Portico magazine as one of the “Portico 10.” He has been rated in Martindale Hubbell’s Judicial Edition as “AV Preeminent” since 2016 and has also been named a Rising Star in Mid-South Super Lawyers®. Saxton completed his undergraduate and graduate degrees at Mississippi College, and he received his Doctor of Jurisprudence at Mississippi College School of Law.

Located in Madison, Mississippi, Saxton Law, PLLC epitomizes the phrase, "Bigger is good. Smarter is better" and practices in issues from Business Formation and Estate Planning, including wills, to IRS Tax Installment Agreements and Bankruptcy.