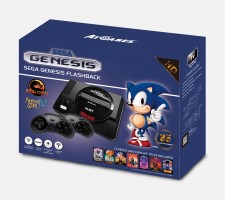 “These upcoming products are our best hardware lineup ever,” says Dr. Ping-Kang Hsiung, CEO of AtGames. “Building on our long history of delivering value-packed, nostalgic products for our customers, this new line-up takes classic gaming to a stunning new level.”

The Ultimate Portable Game Player returns with an enhanced selection of 85 built-in Sega Genesis and Mega Drive classic games. The selection of blockbuster games includes new additions PAC-PANIC™ and Splatterhouse 2™, as well as many more surprises. You can even add your own games with an optional SD card! Returning for 2017 is save game support for the included Phantasy Star™ series and Sword of Vermillion™ role-playing games. A built-in, rechargeable battery, means the on-the-go fun never has to end. Games can be played on the portable’s built-in, high-resolution 2.8” display, or on a TV via optional cable.

With an expanded product line, new titles, and smart new features, AtGames is creating a modern home for all things retro gaming. The AtGames Flashback Zone (AFZ) has an all-star roster of classic publishing partners, including Atari, Sega, Taito, Warner Bros, Konami, BANDAI NAMCO Entertainment, and Activision, making it the definitive destination for classic gaming at major retailers everywhere. Celebrating classic gaming heritage has never been easier, whether for nostalgic old-timers or newer generations looking for a taste of the best of the past. Expect these products and many more from AtGames in stores this holiday season and beyond.

AtGames Digital Media Inc. (http://www.atgames.net) is a leader in innovative consumer-oriented interactive entertainment products. The company leverages the latest technology to develop and publish its best-selling classic video game products for worldwide distribution. AtGames is based in Los Angeles, with international offices in Taipei and Shenzhen.

AtGames®, founded in 2001, is a leader in innovative consumer-oriented interactive entertainment products. The company leverages the latest technology to develop and publish its best-selling classic video game products for worldwide distribution.