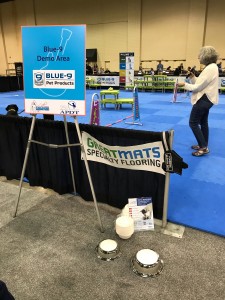 LEXINGTON, Ky., February 4, 2019 (Newswire.com) - In celebration of its 25th anniversary, the 5,000-member Association of Professional Dog Trainers recently equipped its 2018 Conference, which was hosted in Memphis, Tenn., with 50x70 foot area of Greatmats Dog Agility flooring.

APDT Exhibitor Relations Manager Nita Briscoe says in past years, one question she kept getting was, ''What kind of flooring do you have?'' Many of the dog trainers had expressed concern over having their dogs perform on carpet because it can be slippery and cause injury to the dogs.

Having rented carpeting for the conference in previous years, Briscoe said that the annual rental charge, combined with the expense of laying, cutting and taping the carpet made it problematic for the APDT as well.

So she began asking member trainers, including celebrity dog trainer Sara Carson, what type of mat flooring they'd prefer to train on. Carson, who was later nominated for and won the title of 2017 Greatmats National Dog Trainer of the Year, and several other trainers highly recommended Greatmats foam matting.

After looking into Greatmats, Briscoe found the its 3/4-inch-thick Dog Agility Mats not only exceeded the minimal thickness required for proper jumping and agility cushioning, but they were offered in blue - one of the APDT colors.

''People do like the interlocking tiles,'' Briscoe said. ''It saved us money on set, and it was much safer.''

By those criteria, getting Greatmats Dog Agility Mats was a no brainer.

''The advantage we have now, is that we own the Greatmats outright, and we can use them for future conferences,'' Briscoe said.

With more than 500 people in attendance at the 2018 conference, Briscoe says the mats worked out very nicely.

''The trainers felt much more confident with dogs using tunnels and jumps and weave poles,'' she said. ''Even for them specifically... If you're a trainer, you're on ground as well. It gave us a much more professional appearance. It was a nice kind of natural border and it stood out better on site.''

With ambitions of offering things such as flyball for the 2019 conference in Portland, Briscoe says, ''It opens up a lot of doors (and tunnels and weave poles) for us now.''