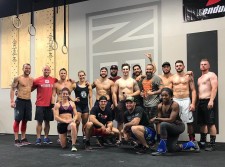 MILLTOWN, Wis., February 19, 2018 (Newswire.com) - Zach Luke is no stranger to the challenges presented by CrossFit - from both the fitness and business sides of the sport. The owner of Zero Machine CrossFit in Phoenix, Arizona, Luke and four other coaches run one of the premier Crossfit centers in the southwest United States.

''We have the only CrossFit Games athlete that comes out of Arizona,'' Luke said, referring to coach Tommy Vinas. ''The other four coaches are regional level athletes.''

We'd literally take the 70 pound (kettle bell) and chuck it in the air and throw it across the room as high as you can get it - and it absorbs all of that sound.

With such a talented and passionate team of coaches, Zero Machine CrossFit members can't help but be absorbed by the buzz surrounding the fast-growing sport.

''It's amazing how excited the member base gets just to watch the guys on TV or girls on TV, and the other coaches,'' Luke said. ''They have personal relationships with them.''

The Problem
One of the problems that come with the popularity of his gym, however, is that fact that CrossFit exercises often generate a lot of noise and vibrations - something not necessarily welcome to nearby neighbors.

''We are located in a strip mall area, and we were very upfront in regards to the noise situation - the dropping of the weights,'' Luke said. ''Everyone was in agreement (when the doors were about to open just over a year ago). 'That's fine' - until we started dropping weights. Then it became a huge issue.''

In fact, it became such a big issue that Zero Machine CrossFit faced the possibility of losing its lease because of it.

Testing The Solution
So Luke began researching and testing different forms of flooring to see if he could reduce the noise enough to appease the neighbors, landlord and property manager. He even worked with an acoustical engineer to analyze different mats and possibly develop a lifting platform to solve the problem.

Eventually, he stumbled upon 2.75 inches thick Sterling Athletic Sound Tiles from Greatmats.com, and his engineer friend concurred that the design could make a difference with the noise issue. So Luke ordered four squares to test.

''We were up against the rope - last resort,'' Luke said. ''We didn't have many high hopes for the product.''

However, after testing the Sterling Athletic Sound Tiles with various forms of weight dropping, Luke, his landlord, and property manager were amazed at the difference they made.

During the testing process, Luke said they loaded a barbell at 135, 185 and 225 pounds and dropped it from overhead, noting that the 135-pound variety is generally what gets tossed around regularly, but with his member base, 185 pounds would be dropped on a daily basis. The 225-pound drop test was the true test standard to see how well the mats would perform.

With the success they had dropping loaded barbells, Luke said they added dropping 70-pound kettlebells to the testing process.

''The kettlebell is so aggressive in the sound it makes because its a ball of weight - a ball of steel,'' Luke said. ''We would typically drop them from extended arms.''

Still amazed by its ability to virtually eliminate all sound, they decided to up their game once again.

''We'd literally take the 70 pound (kettlebell) and chuck it in the air and throw it across the room as high as you can get it - and it absorbs all of that sound,'' Luke said. ''Honestly, that was probably one of the closers when we had the landlord and the property management company in there. The kettlebell, you drop it, and it's very distinguished. Then you take and you chuck it onto the mat and it's almost nothing.''

''Our games athlete, Tommy Vinas, can clean and jerk over 400 pounds and that drops from a push press position over his head directly onto the floor, and we have no complaints,'' Luke said. ''It saved our business. It was worth every penny of the investment.''

After all of the time and money he invested in researching and testing different brands of mats, Luke now says, ''I feel like I'm the expert in gym flooring at this point in time. ... You've got to invest in yourself and you've got to invest in your business. ... The flooring works. I would spend the money again in a heartbeat. There are a lot of companies out there making false claims about their matting. They may be testing at 10 pounds, but we don't use 10 pounds - that's the problem.''

''Our members spend a lot of money, they put a lot of faith, a lot of trust in us,'' Luke added. ''You have to give them a product that's worth what they're paying. We take pride in having a gym that not only performs well but looks great.''