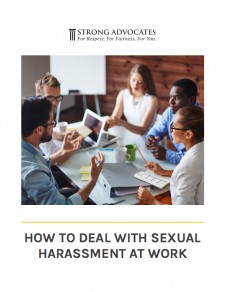 Los Angeles, CA, May 31, 2017 (Newswire.com) - Strong Advocates, a Los Angeles-based employment law practice, has launched Sexual Harassment Awareness month to help workers better understand how to respond to and prevent sexual harassment in the workplace. Throughout the month of May, Strong Advocates has received anonymous questions and has posted responses from a sexual harassment lawyer on their website.

One anonymous questioner asked whether it would be possible to sue their employer for sexual harassment if their boss flirted with them and then downgraded their office space. A Strong Advocates legal expert responded with detailed insight as to what needs to be proven for a viable sexual harassment claim.

The response included definitions of the two types of sexual harassment claims: quid pro quo sexual harassment and hostile work environment sexual harassment. It also described how the questioner’s case could apply to the law, and what proof the victim would need to achieve a favorable outcome with a jury. Additionally, the Strong Advocates legal expert explained how further information pertinent to their case would impact the viability of the claim.

Another user asked whether a co-worker placing his hands on their arm or shoulder whenever they talk would constitute sexual harassment. Strong Advocates advised that they should consider reporting their concerns to the co-worker’s supervisor or Human Resources. They also said that in order for a case to be actionable, the unwanted harassing behavior should qualify under one of the two main types of sexual harassment. It should either be so severe or pervasive that a reasonable person would consider it to create a hostile work environment, or the victim’s reaction to their supervisor’s behavior should affect tangible aspects of the victim’s employment.

Other questions featured on the site include: “How long do I have to file a lawsuit for sexual harassment?” and “What do I do if I was sexually harassed?”

To further address questions employers and workers might have about sexual harassment, Strong Advocates has published an ebook, “How to Deal With Sexual Harassment at Work.” It offers valuable insight from how to recognize sexual harassment to the steps to take when your employer retaliates against you for filing a complaint.

The ebook can be downloaded for free at: https://www.strongadvocates.com/how-to-deal-with-sexual-harassment-at-work/download/.

Strong Advocates is a non-profit legal organization, and we are focused on doing what is right for you.