American Youth Symphony Joins Forces with Rock Icon Steve Vai in a Concert Including His Original Works, as Well as the Rite of Spring and a Piece by Esa-Pekka Salonen

At 2pm on Saturday, March 11 the American Youth Symphony welcomes Steve Vai on-stage for a concert featuring compositions by Igor Stravinsky, Esa-Pekka Salonen, and Vai himself. 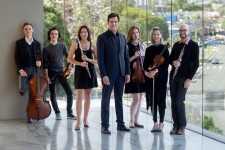 Los Angeles, CA, February 9, 2017 (Newswire.com) - ​​On Saturday, March 11 at 2pm in Walt Disney Concert Hall, the grace and elegance of classical music and the raw energy of rock and roll collide as the American Youth Symphony welcomes guest guitarist Steve Vai to the stage.

Featuring Igor Stravinsky’s The Rite of Spring, and Gambit, a work composed by former Los Angeles Philharmonic Music Director Esa-Pekka Salonen, as well as four original compositions for orchestra and electric guitar, written by Vai himself, this concert serves as a thrilling mix of the traditional and the cutting-edge. Tickets are priced from $15-$46 and seating is limited.

As a three-time Grammy Award winner and one of Guitar World’s “Greatest Guitarists of All Time,” Vai is an undeniable icon in the music industry. Originally a bandmate to Frank Zappa, Vai has worked with such varied artists as David Lee Roth, Whitesnake, Mary J. Blige, Spinal Tap, and Ozzy Osbourne, among many others; in addition to being extremely successful as a solo artist, selling over 15 million records throughout his career. His music has appeared in film, television, and video games.

The concert will be led by AYS Music Director, Carlos Izcaray. A seasoned composer, conductor and educator, Izcaray has cultivated a varied set of musical skills throughout his career. In addition to having led prestigious orchestras in Colombia, Argentina, Switzerland, Italy, South Africa and more, Izcaray has distinguished himself as a talented instrumentalist who has featured as a concert soloist and chamber musician worldwide. His 2010 performances of Virginia by Mercadante won the Best Opera prize at the Irish Theatre Awards, while his most recent orchestral piece, “Cota Mil,” premiered at the Orquesta Sinfónica Municipal de Caracas to great acclaim.

The American Youth Symphony’s mission is to inspire the future of classical music. The organization shares exceptional, innovative concerts based on a landmark Fellowship program for musicians in high school through doctoral music programs. Competitively selected, the orchestra is comprised of 100 musicians who represent extraordinary talent from all over the world. By gifting the community with remarkable concerts at world-class venues for free or significantly reduced admission, the American Youth Symphony remains committed to creating access and opportunity for everyone to experience the inspiration of this beautiful art form.