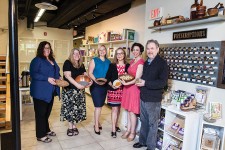 Portland, OR, June 5, 2017 (Newswire.com) - ​American College of Healthcare Sciences (ACHS) announced today that it has been named number two of 100 Best Green Workplaces in Oregon in 2017 by Oregon Business magazine. ACHS ranked number six out of the 100 Best in 2016, up six places from its number 12 ranking in 2015. The college’s overall rise in ranking demonstrates its corporate commitment to sustainable environmental and workplace practices undeterred by exponential growth.

ACHS has been an Oregon-based business for more than 30 years. Its main campus is located at 5005 SW Macadam Avenue in the John’s Landing area of SW Portland and also features the Apothecary Shoppe College Store on-campus (open to the public) that is stocked by the college’s Oregon Tilth Certified Organic facility also located in John’s Landing.

“To be ranked second among the 2017 100 Best Green Workplaces in Oregon is an honor,” says Dorene Petersen, ACHS president and founder. “We were assessed based on employee feedback provided in anonymous surveys and a review of the family-friendly and green-inspired workplace practices and benefits at ACHS, demonstrating that we walk our talk. 2016 survey results showed an increase in employee belief in and support of our work environment, sustainable practices, and decision making from 2015, which is a tremendous validation of our college mission and commitment to transparent, ethical business practices as a Certified B Corporation®. We would not be here without our wonderful students and dedicated staff — we share in this achievement together.”

Looking ahead, ACHS is committed to expanding student, faculty, and graduate engagement in the college’s green initiatives by increasing involvement in remote campaigns, such as the college’s institution-wide participation in the Northwest Earth Institute (NWI) EcoChallenge. “The next frontier for ACHS is to continue to expand and cultivate meaningful engagement in the college’s sustainability initiatives among our students and graduates around the world,” says ACHS Chief Operating Officer Tracey Abell.

ACHS offers affordable, accredited, online, undergraduate and graduate degree programs, certificates, diplomas, continuing education, study abroad, and on-campus wellness workshops in some of the most integrative health modalities currently being researched and implemented by individuals and companies worldwide, including aromatherapy, herbal medicine, holistic nutrition, and holistic spa management, among others.

Earlier this year, ACHS opened a satellite campus in Kona, Hawaii, initially focused on in-person wellness workshops and classes for the local community (https://achs.edu/achs-launches-satellite-campus-kona-hawaii). In 2016, ACHS expanded its curriculum by introducing new accredited courses in Holistic Spa Management and Holistic Sports Nutrition. All ACHS courses support the college’s sustainability mission by furthering its innovative use of technology to preserve and share knowledge in natural medicine while increasing access and reducing waste.

Founded in 1978, ACHS is an accredited college offering online, on-campus, and study abroad integrative health education. With undergraduate and graduate degrees, diplomas, certificates, and continuing education courses in integrative medicine, ACHS makes holistic health and wellness education accessible to a diverse community of learners, including healthcare professionals, military students, stay-at-home parents, and lifelong learners. Specializations include aromatherapy, herbal medicine, holistic nutrition, and wellness. A Certified B Corporation® and 2017 When Work Works award winner, ACHS is also accredited by the Distance Education Accrediting Commission (DEAC), which is recognized by the U.S. Department of Education and by the Council for Higher Education Accreditation (CHEA). Visit www.achs.edu.

About American College of Healthcare Sciences