American College of Healthcare Sciences (ACHS.edu) announced today that it has earned the 2017-2018 Military Friendly(R) School designation for the ninth year in a row and the Bronze Award for Non-Traditional Schools. 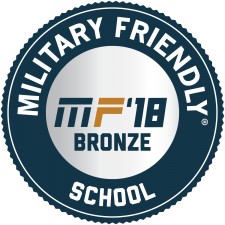 PORTLAND, Ore., December 1, 2017 (Newswire.com) - American College of Healthcare Sciences (ACHS.edu) announced today that is has earned the 2017-2018 Military Friendly® School designation for the ninth year in a row and the Bronze Award for Non-Traditional Schools. First published in 2009, Military Friendly® Schools is the most comprehensive, powerful resource for veterans today. Each year, the list of Military Friendly® Schools is provided to service members and their families, helping them select the best college, university, or trade school to receive the education and training needed to pursue a civilian career.

“ACHS is proud to support our military students at home and abroad,” says Dorene Petersen, ACHS president. “Our veterans, active duty service members, and military spouses have made tremendous sacrifices to protect our country and safeguard our freedom. We’re honored to do everything we can to ensure their ACHS experience is fully accessible, flexible, and targeted to help them make an impact on the communities they serve while in the military and as civilians. Health and wellness play an integral part in transition to civilian life and our everyday living, and ACHS is proud to be our military students’ trusted educator.”

Institutions earning the Military Friendly® School designation were evaluated using both public data sources and responses from Victory Media’s proprietary survey. For the first time, student survey data was taken into consideration for the designation. More than 1,300 schools participated in the 2017-2018 survey and 849 received the designation.

Ratings methodology, criteria, and weightings were determined by Victory Media with input from the Military Friendly® Advisory Council of independent leaders in the higher education and military recruitment community. Final ratings were determined by combining the institution’s survey scores with the assessment of the institution’s ability to meet thresholds for Student Retention, Graduation, Job Placement, Loan Repayment, Persistence (Degree Advancement or Transfer) and Loan Default rates for all students and, specifically, for student veterans.

Daniel Nichols, chief product officer at Victory Media, said, “Our ability to apply a clear, consistent standard to the majority of colleges gives veterans a comprehensive view of which schools are striving to provide the best opportunities and conditions for our nation’s student veterans. Military Friendly® helps veterans make the best use of the Post-9/11 GI Bill and other federal benefits while allowing us to further our goal of assisting them in finding success in their chosen career fields.”

For further information or to arrange interviews with ACHS, contact Lauren Torchia at publicrelations@achs.edu .

Founded in 1978, ACHS.edu is a Portland, Ore.-based, accredited college offering online, on-campus, and study abroad integrative health education. With undergraduate and graduate degrees, diplomas, certificates, and continuing education units in integrative medicine, ACHS makes holistic health and wellness education accessible to a diverse community, including healthcare professionals, military students, stay-at-home parents, and lifelong learners. Specializations include aromatherapy, herbal medicine, holistic nutrition, and wellness. ACHS is a Certified B Corporation® and was named two of 100 Best Green Workplaces in Oregon 2017 by Oregon Business magazine. ACHS is also accredited by the Distance Education Accrediting Commission (DEAC), which is recognized by the U.S. Department of Education and by the Council for Higher Education Accreditation (CHEA). Visit http://www.achs.edu/.

The Military Friendly® Schools list is created each year based on extensive research using public data sources for more than 8,800 schools nationwide, input from student veterans, and responses to the proprietary, data-driven Military Friendly® Schools survey from participating institutions. The survey questions, methodology, criteria, and weightings were developed with the assistance of an independent research firm and an advisory council of educators and employers. Data calculations and tabulations were independently evaluated for completeness and accuracy by EY. The survey is administered for free and is open to all post-secondary schools that wish to participate. Criteria for consideration can be found at militaryfriendly.com.

About American College of Healthcare Sciences