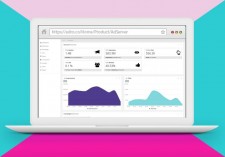 Tehran, Iran, June 11, 2017 (Newswire.com) - The Iranian ad-exchange company, Adro has launched its AdServer service, a technology which enables publishers, ad networks and advertisers to place their ads across various formats.

For the first time in Iran, Adro has brought the AdServer service in order to offer an innovative option for the publishers, ad networks and advertiser which look into maximizing their sells over targeted ads. An ad server stores information about the ad’s content such as banners, images or videos and delivers them to selected websites, apps and video players. A major advantage of this system is that it allows the client to display its content to targeted audience. AdServer also makes it possible to pursue ad impressions, clicks and budgets. Adro’s AdServer gathers data from the user’s cookies, and other information such as the user’s IP address, ISP and browsing history in order to expose them with targeted ads.

An AdServer stores the advertisement and other related information on its server and displays a fresh new ad every time a user visits a website. Adro’s AdServer platform allows the client to serve ads, count them, choose the ads that generate more revenue, and monitor the statistics of the ad campaign. Below you can see the process which goes through an AdServer.

As the first AdServer in Iran, Adro provides comprehensive statistics which lets the client track their campaign’s performance, impressions and clicks. The platform basically allows you to choose your advertisers, ad networks and publisher according to your own observation. The ending result of this platform would allow the client to analyze its campaign performance in real time, and set specific channels to deliver the best results to the user’s browser.

Currently one of Adro’s AdServer clients is Digikala, Iran’s leading e-commerce platform, while more companies are reaching out to use this service. “AdServer brings the publisher’s ad placements into the advertiser’s control. In this way the campaigns could be launched in an instant without the drudgery of separately coordinating the rented display banners with plenty of banner publishers. It’s so far the best solution as we recognize for the in-house marketing teams of agencies and enterprises,” said Davood Hakimi Mood, Business Development Director of Adro.

Since its launch in late 2015, Adro has been able to fill in the gap in Iran’s AdTech ecosystem by becoming the first ad exchange in the county. Read more about Adro from this link.

Anetwork launched in 2010 as a CPC Ad-Network, and in a short span of time grew to be the largest Digital Advertising Network in Iran.

Digital Marketing in the Middle East: The Trends That Matter
Anetwork (Khavarzamin) - Jan 1, 2017