NOTE: This June SPS was originally published online in May 2019.

CARLSBAD, Calif., June 25, 2019 (Newswire.com) - As a dealership shop specializing in luxury vehicles, Dimmitt Collision Center knows its customers don’t just expect their vehicles to function correctly when they are returned— they also expect them to look great.

Dimmitt Collision Director Harry Blackledge shared, “The results we achieve with Accudraft’s Titan downdraft paint booths allow us to exceed our customers’ expectations on even the most luxurious vehicles.”

Blackledge noted, “With the size of the Titans, we are seeing more throughput in our booths, allowing us to do more jobs per day by increased flash and cure times. Our team members are very happy with the Accudraft booths because they work great and allow us to produce more hours and increase production.”

As a shop that repairs an average of 130 vehicles each month, Dimmitt Collision needs to be well-equipped and efficient. The use of Accudraft’s Titan booths allows the shop to produce high-quality jobs more quickly due to the product’s unparalleled airflow and contamination controls. The EnergySmart technology allows Dimmitt to save up to 50 percent on energy bills, and the dual mode technology provides an easy switch between water-based and solvent-based modes, allowing them to prepare for the next project while the last is being completed.

Dimmitt Collision Center began using Accudraft’s booths in 2014. Despite researching other paint booth manufacturers before opening the new facility, “We just kept coming back to Accudraft because of the features they offer and their competitive pricing,” Blackledge said. “We’ve had great success with Accudraft products, and it was definitely the right decision to continue with this brand.”

“Doug has been instrumental in servicing our original spray booths and with the sales and installation of our new Titan spray booths. Doug is a great representative for the Accudraft lines, and his service is exceptional,” Blackledge said.

Completing set-up for its new facility, Dimmitt Collision Center also installed a three-sided Accumix paint mixing room next to the booths to maximize productivity. The code compliant area allows paints to be mixed and stored safely and provides a controlled environment for the refinish portion of each repair job.

Using Accudraft’s Titan paint booths was easy for Dimmitt’s painters because they already had experience with Accudraft’s technology. When Dimmitt first converted to Accudraft’s booths in 2014, Blackledge recalled, “Accudraft’s control panel was a little different from what we were used to, but it was easy to learn. It was leagues better than the other technology available at the time—and the quality product we received is something I can’t say about other manufacturers! We’ve always gotten great reliability from Accudraft.”

Dimmitt Collision Center team members are thrilled with how perfectly the Accudraft Titans configure into their new facility and help them maintain their high standards of service and results.

“The Titan line from Accudraft is superior to our previous spray booths in several ways,” Blackledge said. “They allow more air flow during the spray and drying cycle, which allows for faster dry times when needed. Plus, the size of the spray booths allows us to do more at one time versus going in and out of the booths multiple times for the same vehicle.”

Dimmitt Collision Center is part of the Dimmitt Automotive Group, which was founded by Larry Dimmitt Sr. in 1924. The organization has grown over the years, adding Cadillac in 1965 and Toyota in 1985. Since then, Range Rover, Rolls- Royce/Bentley, Jaguar, McLaren, Aston Martin and Audi dealerships have been added under the Dimmitt name. Dimmitt Automotive Group is now owned by Larry Dimmitt Sr.’s grandson, Richard Dimmitt Sr.

Dimmitt Collision Center holds 10 OEM certifications and is I-CAR Gold-certified. In addition to its primary facility, the shop employs three remote estimators at other Dimmitt dealerships.

A high-quality shop such as Dimmitt Collision Center requires high-quality products to properly serve its customers. Dimmitt has found a key tool to its success in Accudraft’s Titan downdraft paint booths and the Accumix paint mixing room. 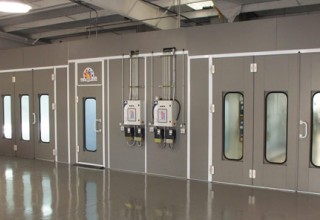 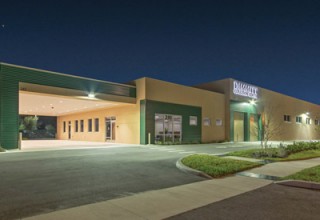 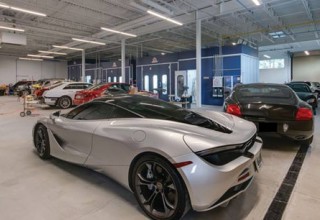