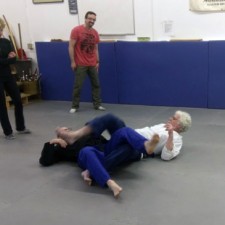 MILLTOWN, Wis., February 15, 2018 (Newswire.com) - Teaching self-defense has been a passion for 73-year old Kung Fu instructor Bruce Bibee since 1977 when he trained in Huntington Beach, California. By 1981, Bibee had earned his black belt and moved to Alaska where he had dreamed of living since visiting the state in the 1960s.
After running into a former training partner at the airport, Bibee and his friend opened a Kung Fu school of their own by 1982 and Bibee's career as a martial arts instructor has been in continuous operation ever since, although the format has evolved over time.

After all of his kids graduated from high school, Bibee decided to cut back on the overhead hassles and headaches of running a big school of his own and began to teach at a gym. When the gym closed just over a year ago, he had to decide whether to retire or open his own facility again.

You have way more fun doing stuff you love. That keeps you alive more than anything else - being able to wake up in the morning being excited about what you get to do today.

He said, ''You have way more fun doing stuff you love. That keeps you alive more than anything else - being able to wake up in the morning being excited about what you get to do today.''

Now the owner of Kung Fu San Soo Center in Anchorage, Bibee says, ''We don't spar. We don't go to tournaments. Special forces learn this down in California. The San Diego kung fu school has a program just for (Navy) Seal training. It's a combat system, not a sport, so it draws a different kind of student body.''

New Beginning
In his 40-plus years of teaching, Bibee has helped other martial artists get their careers off the ground. Among them was Alaska's largest BJJ school - Anchorage Brazilian Jiu-Jitsu (ABJJ) - which started in his facility until growing enough to open a space of its own. (Bibee's youngest son also teaches for ABJJ.)

During that time, Bibee discovered Greatmats Grappling MMA mats, which ABJJ utilized for its training and recommended for him.

''They use it for grappling,'' Bibee said. ''We do stand up. We do on the ground. We do both. ... They're rigid enough for stand up and you can take a hard fall on it and not worry about getting hurt.''

Having previously trained over a thick pad topped with a commercial carpet for stability, Bibee said he'd never found mats that actually worked for stand-up, taking hard falls and working on the ground all in one before.

''That's what I was impressed with the most,'' he said.

With a student base ranging between 15 and 20 students, Kung Fu San Soo Center runs classes six nights per week and also travels to rural areas of Alaska as far away as Fairbanks (360 miles) to teach self-defense with his son, who teaches Brazilian Jiu-Jitsu.

''We got enough extra where we can take our own mats with us,'' Bibee said, noting that it's handy to have mats economical enough to do so and good enough quality that he can trust them.

Being able to trust the mats has been key to improving the teaching/learning experience for Bibee, his son, and their students.

''It's much easier to teach beginning students (with these mats),'' Bibee said. ''One of the more difficult aspects of the learning is the fear of falling that everybody has. Once you get to be an adult, they don't want to fall down anymore. ... The most common call I get from women who have been in my classes is, 'Thanks for teaching me how to fall.' Of all the things we teach them, that's the thing we always get calls on. ... It really cuts down on the injuries that could be happening.''

So instead of spending his ''golden years'' basking the glory of doing nothing, Bibee serves as a trauma counselor by day and kung fu instructor by night.