5 Lessons for Success From Usain Bolt 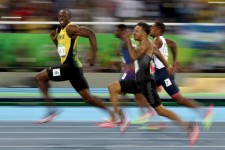 Minneapolis, MN, December 6, 2016 (Newswire.com) - Usain Bolt is an Olympic legend who has been called “the fastest man alive” for smashing world records and winning 9 gold medals as a reigning champion at the 2008, 2012 and 2016 Summer Games. The road to athletic success whether in high school or the Olympics requires hard work and belief in one's self. Usain Bolt has done that and here are five lessons you can learn from him.

1. You have to want it more

“Those seven guys behind you in that lane, they want it as much as you want it. So, you have to want it more. This is why you train harder.” – Usain Bolt

In sports, the only way to succeed is to work harder than your competition. Everybody wants to be a champion, but who is willing to work the hardest?

Under Recruited Preps is for those kind of athletes. The athletes who work hard and deserve a chance to be looked at by college coaches. Once a member, student-athletes have access to every NCAA and NAIA institution.

2. Focus on the finish line

“There are better starters than me, but I’m a strong finisher.” – Usain Bolt

This reference is also in the Bible-

Everybody's recruiting process is different. The main thing is focusing on the finish line throughout high school. Remember that recruiting starts the first day of freshman year.

“I always had to keep improving my skills in order to remain competitive and keep winning.” – Usain Bolt

You can’t be complacent in sports. The competition wants it just as bad. Less than six percent of high school athletes will play in college. The competition is fierce. Under Recruited Preps will guide you throughout the process and provide you maximum exposure to college coaches.

This is the first rule when it comes to succeeding. If you don’t believe in yourself who will?

“I’d like to say to all my fans out there, thanks for all the support. And to all my doubters, thank you very much because you guys have also pushed me.” – Usain Bolt

You will always have doubters, but the best feeling is proving them wrong. Every successful person has had a couple doubters and pushed even harder.

Under Recruited Preps is all about motivating student-athletes and making dreams a reality.

Create a FREE profile today with the #1 athletic recruiting network!

About Under Recruited Preps

College Scholarships: The #1 Athletic Recruiting Network
According to the College Board, the average cost of tuition and fees for the 2015-2016 school year was $32,405 at private colleges, $9,410 for state residents at public colleges, and $23,893 for out-of-state residents attending public universities.
Under Recruited Preps - Nov 25, 2016
Newswire