Five martial artists are voted into final of contest to win new mats or cash for their schools after sharing how their experiences with martial arts have inspired them. 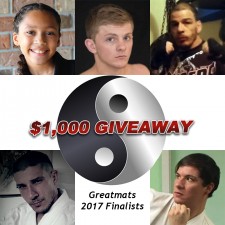 Sharing their inspiring stories and making the finals were:

Justin Hagen – a New Jersey native who used his journey to becoming 2nd Dan in both Taekwondo and Isshin-Ryu Karate to serve as a way to give his life direction, eventually leading to becoming an instructor at BucksMont Taekwondo in Hatfield, Pennsylvania.

Michael Davila – A former prison inmate and self-admitted "menace to society" who used mixed martial arts to save him from himself and become a role model for his 6 children in Springfield, Ohio.

Ryan MacDonald – a 24-year-old mixed martial artist who delayed his UFC debut after a series of unfortunate events that included the suicide of his big brother. In the meantime, he's honoring his brother's memory by helping others by teaching at his gym, 691ON1 MMA & Fitness in North Platte, Nebraska, and continuing to train for his UFC dream.

Sean London – a 2nd Dan in ITF Taekwondo. London overcame continual interruptions in his martial arts training due to complications of a broken home. His experience in various arts in the states of Texas, Utah and New Mexico led him to become an instructor at the Amarillo Activity Youth Center in Amarillo, Texas.

To learn more about their stories, visit http://www.greatmats.com/gmats-giveaway.php. Three lucky finalists will split up to $1000 in cash or prizes from martial arts flooring online retailer Greatmats.com. Winners will be named Sept. 6, 2017.