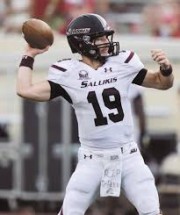 Boston, MA, April 1, 2016 (Newswire.com) -  Former Southern Illinois Quarterback Mark Iannotti has received an invitation to workout for the Chicago Bears of the NFL. Iannotti finished his career by completing 66% of his passes with 24 touchdowns and a passer efficiency rating of 144.4.

Iannotti has been on the rise since since his season ended, and continues to improve on his mechanics and footwork. For the past few months Iannotti has been working with renowned quarterback guru Jeff Christensen. Christensen has played a huge role in the development of former 4th round pick and current Redskins started Kirk Cousins. You can see here https://www.youtube.com/watch?v=cs8S6ZE66rs that Iannotti has already drastically improved the quickness of his release. At 6'2" and 220 pounds Iannotti has the size NFL teams look for. He is a tremendous leader who prides himself on his consistency and accuracy with the football. Iannotti has been known for being a student of the game with a brilliant football mind. After running a 4.87 at his pro day, Iannotti also showed scouts that he has to athletic ability to escape the pocket and keep plays alive. Agent David Schuman states, "Mark is one of those once in a lifetime kids, who can play the game and understands inside and out. He's an academic all american, so he is athletic and smart."

"Mark is one of the most cerebral QB's out there. He has made the players around him better and would be a suitable backup in the NFL who could emerge down the line as a starter with grooming."

Iannotti is a very dedicated developmental player who lists his study habits, character and toughness among his many strengths. To go along with his skills as a quarterback Iannotti also has experience holding for field goals and could contribute right away on special teams.

#####
About Inspired Athletes
Inspired Athletes (http://www.inspiredathletes.com) understands the amount of hard work, long hours, and sacrifice it takes for athletes to reach the professional level. To be a part of the 2% that get to go on and continue to play the sport they love for a living is a blessing. The decision in choosing the type of representation that fits is as important as it was selecting the best college program. We are available to answer any questions for athletes and their family members and only ask that athletes keep these key values that we represent in mind – INTEGRITY, INSPIRATION, FAMILY, CHARACTER, DILIGENCE, and LEADERSHIP. Inspired Athletes offers a breadth of services to help support the player throughout his lifetime which will include his NFL career and beyond. Our goal is for the player to be a part of our family and have the opportunity for lifetime success on and off the field. Services include, Player Representation, Marketing, Endorsement & Branding, Social Management, Financial Support, Lifetime Management, Medical Services, Insurance, and Legal and Accounting.

About NUC Sports
Schuman's National Underclassmen Combine (NUC Sports) is the longest running underclassmen event and the most respected combine and football camp in the country. Founded in 2005, NUC was formed to create a focused environment that allows freshmen, sophomores and juniors to showcase their skills and talents for college recruiters and recruiting organizations, giving each student-athlete ample opportunity to get recruited throughout his high school career, not just the spring before his senior year. Since its inception, more than 100,00 athletes have come through NUC events and more than 10,000 athletes have received Division-I scholarships after first attending an NUC event.