Defensive Back and Kick Returner Jihaad Pretlow of Fordham Will Compete in Pro Day March 29th, per Inspired Athletes 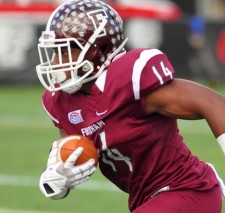 New York, NY, March 29, 2017 (Newswire.com) - ​Jihaad Pretlow, Fordham's star cornerback and kick returner will compete in Fordham's pro Day on March 29th. Jihaad Earned All-Patriot League honors in his first year with the Rams in 2015, both at defensive back and on special teams…record second most kickoff return yards in a season at Fordham in 2015… led team in pass breakups and fourth in tackles.

In 2016 Jihaad had an impressive Senior campaign with 16 PBU's and averaging 30 yards plus per kickoff return. He was named All Patriot League again in 2016.

"We expect Jihaad to put down the most impressive times for an athlete in his position. He is so fast and so powerful, he would be a can't miss for any team."

Jihaad is expected to put on a great performance in all the testing areas and the defensive back drills. His unique athleticism and kick return skills makes his a great prospect for the draft.