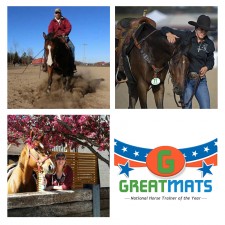 MILLTOWN, Wis., November 30, 2017 (Newswire.com) - ​They come from all different walks of life, but something these 13 horse trainers have in common is the fact that they are making a positive impact in their communities through their work with horses and beyond.

The following 13 horse trainers, representing 10 different states, have been nominated for the honor of National Horse Trainer of the Year, and award presented annually by Greatmats.

Voting, which began Nov. 16, is open to the public through Nov. 30 on Greatmats Facebook page as they weigh in on which two trainers will be named 2017 finalists for the award. Heading into the final day of competition approximately 40 votes separate the top two contenders - Kelly Murphy Alley of Willmore, Kentucky and Bill Brown of Fowlerville, Michigan.

The winner will receive horse stall mats, or a cash option, from Greatmats, which is in its third year of hosting the contest.

This year's nominees are as follows.

Bryanna Larson of Pony Tales Refuge and Rehab in Colfax

Learn more about the 2017 National Horse Trainer of the Year Award and how to vote for your favorite trainer at https://www.greatmats.com/horse-stall-mats/greatmats-annual-national-horse-trainer-of-the-year-contest.php