13 Competing for National Cheerleading Coach of the Year 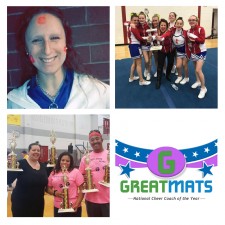 MILLTOWN, Wis., November 30, 2017 (Newswire.com) - 13 of the nation’s top cheerleading coaches are competing in a new way as voting has been taking place in Greatmats 2nd Annual National Cheer Coach of the Year Award contest. The award contest is designed to recognize those cheerleading coaches who have made a positive impact in their communities. Nominated by their peers, students and community members these cheer coaches will compete for new mats or a cash option, presented by Greatmats as part of its 3rd annual National Award Series. Voting began Nov. 16 and runs through Nov. 30, as posted on the Greatmats Facebook page.

Heading into the final day of the social media vote to determine the two finalists Shawna Dole of Charlestown, Massachusetts, and Sherri Andrzejewski of Willkes-Barre, Pennsylvania lead the field of contestants with 2016 title holder Amy Beth Klopf of Coleman Michigan sitting in third place.

This year's nominees are:

Learn more about the National Cheerleading Coach of the Year Award at https://www.greatmats.com/cheerleading-mats/greatmats-annual-national-cheerleading-coach-of-the-year.php