Bonnie Watson Coleman receives a 100% rating from the U.S. Women's Chamber of Commerce as a champion of women's economic priorities and is endorsed by the Women's Chamber for New Jersey's 12th Congressional District. 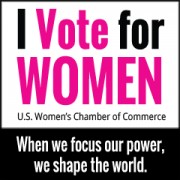 Washington, DC, August 25, 2014 (Newswire.com) - “I am proud to announce the endorsement of the U.S. Women’s Chamber of Commerce (http://www.uswcc.org) for Bonnie Watson Coleman in the race for New Jersey’s 1st Congressional District,” stated Margot Dorfman, CEO. “Rep. Watson Coleman is a respected, influential leader who will always be on the front line fighting for issues important to her district.”

“Bonnie Watson Coleman consistently stands up with courage to do what is right for civil rights, minimum wage, education, family-friendly work environments and access to reproductive healthcare,” adds Dorfman.  “If the fight is for people, for the middle class and opportunity, for core American values and principles – Bonnie Watson will always be on the front line. She’s been elected eight times to her State Legislature; it’s time to send her to Washington as a progressive, experienced leader for change. ”

“Growing the number of strong women leaders in Congress is critical to assuring that women’s economic priorities are advanced,” adds Dorfman. “American prosperity is directly linked to the economic success of women. Seventy percent of women work and seventy-two percent of mothers work. A record forty percent of all households with children under eighteen include mothers who are either the sole or primary source of income for their family. Women own 225,000 New Jersey firms employing 258,000 workers,” continues Dorfman.

“Bonnie Watson Coleman has also broken through both gender and racial barriers to become the first African American woman to serve as a Majority Leader of the New Jersey Assembly and as Chair of the New Jersey Democratic State Committee,” adds Dorfman.  “Her leadership for both gender and racial communities is deeply important.  We are proud to endorse her to represent New Jersey’s 12th District in Congress,” concludes Dorfman.