Springbrook, a provider of expert support services for special needs people of all ages, is pleased to welcome United States Congressman, Chris Gibson, to its Board of Directors. Congressman Gibson was formally elected to a three-year term by Springbrook's Board of Directors at the organization's first board meeting of the 2016 fiscal year on Friday, August 14. 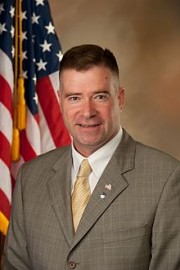 Oneonta, NY, August 25, 2015 (Newswire.com) - Springbrook, a provider of expert support services for special needs people of all ages, is pleased to welcome United States Congressman, Chris Gibson, to its Board of Directors. Congressman Gibson was formally elected to a three-year term by Springbrook’s Board of Directors at the organization’s first board meeting of the 2016 fiscal year on Friday, August 14. He will begin his term in the fall of 2015. As a member of the board, Gibson will work with other board members and Springbrook’s leadership team in providing strategic guidance to New York’s leading service and support provider for children and adults with developmental disabilities.

Congressman Gibson has been a representative of the 19th Congressional District of New York State since 2012 and serves on the House Armed Services, Agriculture, and Small Business Committees. He has an MPA and PhD in Government from Cornell University and is the author of the book, “Securing the State,” which was published in 2008. Gibson’s professional history includes a 24-year Army career, during which, he attained the rank of Colonel and was deployed seven times. His deployments included several combat tours in the Middle East, two counter-drug operations in Eastern Europe, and an assignment to Haiti, where he commanded the 82nd Airborne Division’s 2nd Brigade Combat Team (BCT) during the beginning of the humanitarian relief effort following the 2010 earthquake that decimated the region. Upon the unit’s return from that assignment, the Secretary of the Army awarded the BCT the Superior Unit Award for their actions. During his Army career, Gibson earned a variety of special honors and awards, including: two Legions of Merit, four Bronze Star Medals, the Purple Heart, the Combat Infantryman’s Badge with Star, the Master Parachutist Badge, and the Ranger Tab.

Since he first entered Congress in 2010, Gibson has made his commitment to helping people with a wide range of disabilities a priority—from his support of the popular disability education legislation, the Individuals with Disabilities Education Act (IDEA), to his involvement with organizations like NYSID, or the New York State Insurance Department, which helps people with disabilities find job opportunities. The Congressman has championed for autism awareness and support services, such as when he personally presented a new American flag to the Center for Spectrum Services located in Kingston, New York. And earlier this spring, the Ulster County ARC recognized him for his advocacy by presenting them with their “Heart of Gold” award. Of his board membership, he says, “I am honored and humbled to be joining the Board of Directors at Springbrook. The compassionate and important work that Springbrook does so effectively is vital to countless families and communities in Upstate New York. I’ve been very impressed with all of my interactions with Springbrook’s leadership team and staff, and was therefore interested in helping out in whatever way is best when I was invited to join their Board.” In addition, he says he looks forward to helping Springbrook “in their mission to serve people with special needs and developmental disabilities. This is a wonderful organization that makes a real difference in the lives of many of our most vulnerable citizens.”

Springbrook’s board is integral to the organization’s decision-making process. With his years of experience in supporting people with disabilities, Gibson’s board membership will allow him to make focused decisions that will affect not only those who receive services through Springbrook, but others across the state as well. Patricia Kennedy, Springbrook’s CEO, works closely with the group to help guide Springbrook’s strategic goals, marketing and development objectives, facilities and program growth, and overall operations. She says of Congressman Gibson’s membership: “I am excited to welcome him to our board. I know that Congressman Gibson will be an asset to our organization. He has been dedicated to Springbrook’s cause for many years and has historically had much to offer, and by joining our leadership team, Chris Gibson will carry on the tradition of leadership and commitment that makes the Springbrook Board of Directors so unique.”

Springbrook is a leader in providing innovative supports for individuals with developmental disabilities of all ages.