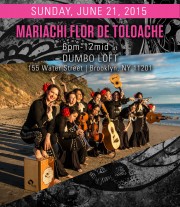 Mariachi Flor de Toloache (MFdT) is quickly taking on the world by blending traditional and contemporary musical styles and promoting a female presence in the Mariachi world. Flor de Toloache announces today a fundraiser event hosted by MFdT with a full lineup of artists scheduled to play the event, culminating with a full performance from MFdT. Tickets are on sale HERE

​Help Bring Mariachi Flor de Toloache  On Location to Mexico!
Mariachi Flor de Toloache is the subject of an exciting documentary, “Mariachi with Pants,” which takes us on a journey of determination and personal struggle in a male dominated music world. Director Sonia Fritz follows MFdT from city to city, showing how their innovative musical arrangements and powerful feminine presence turn the traditional Mariachi stereotype on its head. Fritz believes that the band members’ passion and talent make them role models for Latino youth and adults alike. Now, she intends to film MFdT as they bring their music back to its Mariachi roots. The band has been selected to be part of the annual International Mariachi Festival in Guadalajara “Encuentro Internacional del Mariachi y la Charrería” in August. This event brings bands from around the world to Guadalajara, the heartland of Mariachi tradition. They are also visiting Puebla City, Mixteca towns of Chinantla, Piaxtla, Santa Inés de Ahuatempac, home of the bandleader’s mentor Don Toño and Mexico City where they will perform at the renowned Plaza Garibaldi. Mariachi Flor de Toloache Summer Solstice  will help fund the band’s trip to Mexico

About Mariachi Flor de Toloache
Mariachi Flor de Toloache is the first and only established all-female Mariachi band in New York City. A unique all-women’s Mariachi group composed of diverse nationalities; Mireya I. Ramos, the band’s founder and director, who grew up in California and Puerto Rico, is of Dominican and Mexican descent, co-director and founding member Shae Fiol hails from Oregon, with Cuban roots. The rest of the band comes from countries around the world: Mexico, Colombia, Venezuela, the Dominican Republic, Canada, and even Australia

Mariachi Flor de Toloache (MFdT) is quickly taking on the world by blending traditional and contemporary musical styles and promoting a female presence in the Mariachi world.