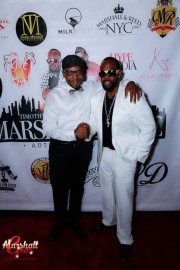 Brooklyn, September 2, 2015 (Newswire.com) - It was quite an eventful night for Marshall Gras Entertainment and Timothy Marshall Enterprises as they presented the successful Marshall Hype Music Showcase at Milk River Lounge, hosted by international all-star Majah Hype.  The sold out crowd were there to enjoy  the great food, the awesome give-a-ways and  the talented performers.  Per usual Marshall Gras Entertainment’s “Brooklyn Bridge” band accompanied the performing artists making the experience that much more live and  intimate.

There were many surprises revealed throughout the night, such as, sponsor Kevin Kidd Master Barber announcing the raffle of a free haircut for someone in hospice,” to  Marshall Gras Entertainment and BET Apollo Live winner J’Maine Jones announcing the “Girl’s Night Out” event for the benefit of Ovarian Cancer research and a cure.  The biggest surprise of the night came when Majah Hype announced his new movie “Foreign Minds Think Alike”!

With Marshall Gras Entertainment and Timothy Marshall Enterprises’ reputation of attracting an international audience, it was no surprise the event ended with the crowd and host Majah Hype showing appreciation for the influential Caribbean culture in New York City.  It was the perfect pre-celebration before the world famous Labor Day celebration, the West Indian Day Parade.