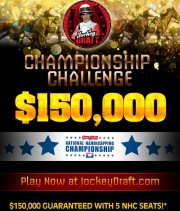 Jockey Draft allows players to build their own Jockey Draft, or lineup, over specific race tracks. Daily and week-long games are offered to participants at various price levels, with a portion of the proceeds going directly to support the Jockeys’ Guild and Permanently Disabled Jockeys Fund (PDJF).

"We are really excited that the NHC has agreed to include Jockey Draft as a qualifying tourney. We have a growing base of players who enjoy competing in this new draft style game," notes Jen Viens, Founder of the Jockey Draft Fantasy Game.

The entry fee for the Jockey Draft Big Game is $700 with a maximum entry field of 300 entries.  Participants must register by the first post of the first race on Breeder’s Cup Day One (Time TBD), October 31, 2015 or by qualifying in one of the many Race Track Warriors Feeders or Satellite games by an approved satellite sponsor.  Just this week Race Track Warriors began holding feeders to win into the Big Game for as little as $14.

For scoring, each jockey is scored based on the pari-mutuel value of their official final placing. For example, if a jockey finishes first, the jockey would receive Win, Place, and Show totals. Scoring for each jockey will be updated shortly after each race they ride in and after the race has been made official. The cumulative score for each jockey is then added together and the cumulative score for all eight (8) jockeys will be the lineup score. The player whose lineup has the highest score will be the winner.

Jockey Draft allows players to pick, play, and trade the best jockeys in the industry.  Jockey Draft offers the lowest takeout in the industry for handicappers.  Players can create their own games, compete head-to-head, and draft their ultimate Jockey dream team while helping to support two of the leading industry-related charities.

National Handicapping Championship (NHC) is the richest, most important and most prestigious tournament for horseplayers in the world and is the culmination of a year-long series of sanctioned local tournaments conducted by racetracks, casino race books, off-track betting facilities and horse racing and handicapping websites, each of which sends its top qualifiers to the national finals in Las Vegas.

About the Jockeys’ Guild:

Established in 1940, The Jockeys’ Guild in a non-profit organization dedicated to the health and safety of professional American jockeys.  Over the years, the Guild has helped to create a safe environment for jockeys and continues their mission through today, encouraging racing industries to work together to ensure that jockey safety is prevalent in all racing venues.

The Permanently Disabled Jockeys Fund (PDJF) is a 501(c)(3) public charity that provides financial assistance to some 60 former jockeys who have suffered catastrophic on-track injuries. Since its founding in 2006, the fund has disbursed over $5 million to permanently disabled jockeys, most of whom have sustained paralysis or brain injuries.  The PDJF relies on support from everyone in the racing industry, their business partners, and fans in the hopes of establishing an endowment that will one-day enable them to become self-funded.

Founded by horse players with an expert background in technology, EQUUS Games is devoted to the thrill of participating in online gaming and to the ultimate user experience at RaceTrackWarriors.com and JockeyDraft.com.