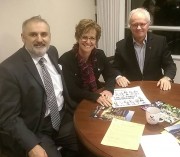 Saskatoon, Saskatchewan, September 30, 2015 (Newswire.com) - ​​​​​Mumbai, India, based lawyer, Jamshed Mistry, who is also a member of the Canadian Bar Association, is pleased to announce that his client Canadian Billionaire Erwin Singh Braich, 59, in his capacity as a trustee of the Braich Group of Companies and Trusts (‘Braich Group’), has made an offer to acquire control of Karnalyte Resources Inc. (‘Karnalyte’), a publicly traded company.

Mistry stated that if both sets of warrants are exercised, it would give the Braich Group approximately 75% ownership of Karnalyte, on a fully diluted basis.

In addition to the immediate equity injection that Karnalyte will receive of CDN $198,450,000, if the warrants are exercised, as expected within 24 months, the company would receive an additional CDN $238,625,000. The Braich Group has also undertaken to provide an additional CDN $400 million by way of a loan facility, for completion of phase one of the potash solution mine located in Wynyard, Saskatchewan. The project has received approvals from all levels of government and is ready for construction.

The arrangement was made possible by Ms. Betty Hayer-DuSange, founder and Chief Executive Officer of the Ishan Group of Companies. Ms. Hayer-DuSange stated that she began her work with Karnalyte, in 2011 and was glad that she could arrange a deal of this magnitude that would benefit all involved parties.

The Ishan Group of Companies, had previously assisted Karnalyte in receiving an investment of CDN $45 million in March, 2013, from Gurjarat State Fertlizer and Chemicals Ltd. (‘GSFC’)

The deal with GSFC included an off-take agreement whereby GSFC will receive 350,000 tonnes of potash annually. At the time of this transaction reaching conclusion, now Prime Minister of India, Narendra Modi, was the Chief Minister of Gujarat state.

Ms. Hayer-DuSange, went on to say that, “after the CEO of Karnalyte, signed an agreement for the transaction that will inject in excess of CDN $800 million within 24 months into the company, that it was nice to see that Mr. Braich and Mr. Phinney were already collaborating to quickly implement phase two and three which will cost between CDN $2.5 to $3 billion, so that this project could produce in excess of 2 million tonnes annually of potash”.

“With further Environmental Impact Studies meeting the approval of the Province of Saskatchewan, the Braich Group is prepared to fund the expansion of the annual capacity of potash production to become one of the largest low-cost producers in the world. The potential is 6 to 8 million tonnes annually, in fact, given the size of the reserves”, added Ms. Hayer-DuSange.  “This is why we are already working on potential rail routes and port facilities with government officials, Mr. Braich and the very talented Karnalyte team”, she concluded.

The terms of the agreement are subject to approval by Karnalyte’s board of directors, shareholders, and the Toronto Stock Exchange.

About Law Offices of Jamshed Mistry

ILA is an association founded in Mumbai, India having a network of independent legal professionals from all over the world.