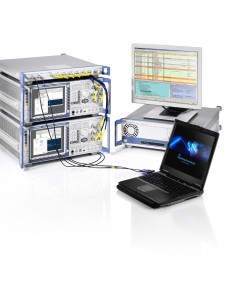 The ZTE Gigabit Phone, powered by the Qualcomm®Snapdragon™ 835 mobile platform with an integrated Snapdragon X16 LTE modem, utilizes a combination of carrier aggregation, 4x4 MIMO antenna technology, and 256QAM modulation to achieve LTE download speeds that are up to ten times faster than first generation LTE devices. It is the cornerstone of ZTE, introducing gigabit data rates to 4G networks and providing worldwide carriers with pre-5G solutions.

The revolutionary gigabit phone technology will be showcased using the R&S CMWflexx system from Rohde & Schwarz. The R&S CMWflexx system measures data throughput exceeding 1 Gbps in the downlink by combining three downlink carriers, two of which use 4X4 MIMO and the third 2X2 MIMO. All three carriers use 256QAM modulation. The R&S CMWflexx test solution offers fast and accurate results and is sufficiently flexible to support a number of other key applications such as Cat M1 (eMTC), Cat NB1 (NB-IoT), LAA, 8X4 MIMO DL MIMO and shown data throughput up to 2 Gbps.

“The R&S CMWflexx is based on the R&S CMW500, the world’s most widely used T&M platform for development, production and service of mobile phones and devices. It meets all of the requirements for a state-of-the-art wireless communication tester, and has the flexibility to meet the testing needs of high-speed gigabit devices,” said Mike Thorpe, Product Manager Wireless Device Test at Rohde & Schwarz USA, Inc. “We are looking forward to seeing the ZTE Gigabit Phone reach unprecedented download speeds at MWC Americas."

"We are proud to introduce the world’s first smartphone with download speeds up to 1 Gbps. This device and others to come will change the way people communicate and live their daily lives,” said Jeff Yee, VP, Product Marketing & Strategy, ZTE Mobile Devices. "Using the R&S CMW500 test platform, we are excited to showcase our Gigabit Phone and our expertise in 5G and pre-5G mobile broadband solutions at Mobile World Congress Americas."

ZTE Mobile Devices is a division of ZTE Corporation, a global telecommunications equipment, networks and mobile devices company headquartered in Shenzhen, China. ZTE is a publicly traded company listed on the Hong Kong and Shenzhen stock exchanges. ZTE has partnered with 231 major carriers, including the world’s top 50 carriers around the globe. ZTE has ranked No. 3 for six consecutive years in terms of the number of PCT international patents applied for since 2011.

As one of the world’s leading smart devices makers, ZTE has been engaged in the research, development, and manufacturing of mobile phones since 1998, with 19 years of history. ZTE is doing business in more than 160 countries and regions globally. For more information, please visit: www.ztedevice.com/

The Rohde & Schwarz electronics group offers innovative solutions in all fields of wireless communications as well as in IT security. Founded more than 80 years ago, the independent company has an extensive sales and service network with subsidiaries and representatives in more than 70 countries. On June 30, 2016, Rohde & Schwarz had approximately 10,000 employees. The group achieved a net revenue of approximately EUR 1.92 billion in the 2015-2016 fiscal year (July to June). The company is headquartered in Munich, Germany, and also has strong regional hubs in Asia and the USA.

All press releases, including photos for downloading, are available on the internet at http://www.press.rohde-schwarz.com.