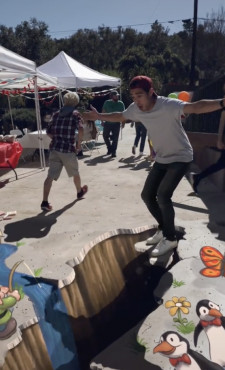 LOS ANGELES, April 1, 2022 (Newswire.com) - Zach King is no stranger to viral success, and last year was no different for the 32-year-old "digital magician". His short and visually mystifying videos rake in millions of views on a good day, but, last year, King landed the 5th most viewed video on the social media app TikTok of 2021 (according to newsroom.tiktok.com) - ending the year with over 175 million views.

In the video, Zach stretches the definition of "magic", blending the lines between what is real and what is merely illusion. At the start of the video, King walks through what looks like an art fair. He's admiring an impressive chalk drawing of a deep, dark pit in the ground and stops for a photo op. But before his friend can snap a picture, the ground under him gives way and Zach tumbles down into the drawing, disappearing into the pit below.

Many fans clamored for a behind-the-scenes video, which Zach sometimes posts of his more elaborate magical stunts. That video, which is posted on Zach's YouTube page, is no less magical than the TikTok itself and it shows how versatile King and his team of self-proclaimed "Magic Makers" really are.

Zach's fans look forward to another year of viral hits. What other records will King and his team smash in 2022?