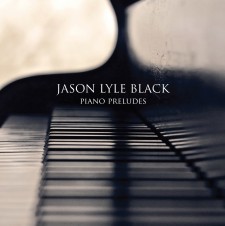 “Piano Preludes is one of the most beautiful albums I’ve been associated with,” says producer Paul Cardall, a Steinway concert artist and owner of the award-winning Stone Angel Music record label, which released the album. “We are thrilled by the response to this gorgeous debut album.  Such a high debut is incredible for a new artist!"

Piano Preludes consists of fifteen original compositions for piano and strings, designed to relieve stress and anxiety and promote healing.  The album reached #1 on the iTunes New Age chart upon its release, followed by #2 on the Billboard New Age chart--a phenomenal achievement for a new artist. Critic Kathy Parsons dubbed Piano Preludes “masterful…overflowing with grace, reverence, and heart.”

“We are thrilled to have Jason Lyle Black on our label,” notes Cardall.  “With the worldwide reach from his music videos, and now an incredible debut album that heals and soothes listeners, Jason Lyle Black is truly a rising star in the music industry!”

Piano Preludes is available on iTunes, Amazon, Spotify, Pandora radio, and at Deseret Book retail stores.  The album is distributed by Alliance Entertainment, CDBaby, and Deseret Book Distributors.  Information on Black's live performances and booking can be found on his website at www.jasonlyleblack.com.